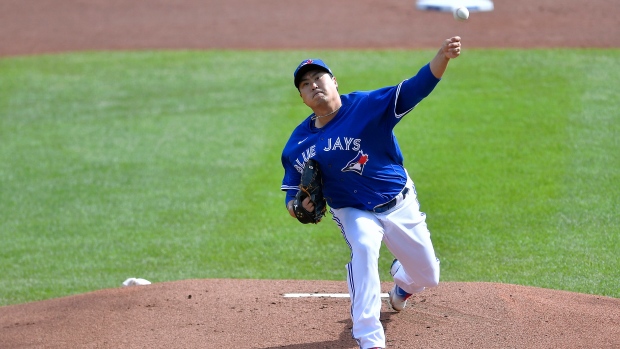 Santiago Espinal hit a three-run double in a five-run sixth inning as the Blue Jays remained a half-game ahead of the New York Yankees for second place in the AL East. Toronto is 3 1/2 games behind Tampa Bay for the division lead.

The Blue Jays won the final two games of their series against the Mets after getting routed 18-1 in Friday night’s opener. New York dropped five games below .500 and remains out of the NL playoff field.

Colorado, Milwaukee, and Cincinnati are all ahead of the Mets in the post-season race.

“That’s the toughest part, knowing that we have to win and other pieces of the puzzle have to fall into place,” New York's Todd Frazier said.

Pitching on an extra day’s rest, Ryu (4-1) allowed one run and eight hits in six innings, struck out seven and walked none.

“The extra day helped,” Ryu said through a translator. “I felt fresh. Today I felt good on the mound.”

The left-hander retired his final eight batters, fanning four. Ryu has not lost since July 30 against Washington, his second start of the season.

“He’s an ace,” Blue Jays manager Charlie Montoyo said. “Early on, phew, they were on to him, and then he made an adjustment and did a great job.”

Toronto second baseman Jonathan Villar made the defensive play of the game, leaping to snare Pete Alonso’s liner in the eighth.

Gurriel made a sliding catch in left in the first, then connected on the first pitch he saw in the second. His 447-foot drive left the Triple-A ballpark the Blue Jays are using as their temporary home, clearing the high screen in left that’s intended to keep balls from landing on neighbouring Oak Street.

““Every time he goes to hit, I think he’s going to hit a homer,” Espinal said of Gurriel. ”It’s been fun to watch.”

New York’s Dominic Smith hit a two-out RBI single off Ryu in the first but the inning ended when Frazier got caught in a rundown between third and home.

“Those types of events happening are just going to challenge us, especially at this point of the season,” Mets manager Luis Rojas said. “We have 13 games to go, we’ve got to clean it up.”

Brad Brach walked the bases loaded to begin the Toronto sixth before Jared Hughes walked Villar to force in a run. After pinch-hitter Travis Shaw struck out, Espinal cleared the bases with a double.

“I just pretty much stunk,” Brach said. “There’s no other way to really explain it.”

Luis Guillorme replaced Jeff McNeil at second base in the bottom of the fourth. The Mets said McNeil was removed because of an upset stomach. Rojas said McNeil was feeling better after the game.

Mets: New York activated LHP Steven Matz (shoulder) off the injured list and optioned RHP Drew Smith to the alternate training site. Rojas said Matz was available out of the bullpen against Toronto. … Brandon Nimmo started in centre in place of Jake Marisnick, who is day-to-day after leaving Saturday’s game because of a tight right hamstring.

Mets: New York is off Monday. RHP Rick Porcello (1-4, 6.07) starts Tuesday in the opener of a three-game series at Philadelphia. The Phillies have not named a starter.

Blue Jays: After an off day Monday, RHP Taijuan Walker (3-2, 2.95) starts Tuesday in the opener of a three-game series at Yankee Stadium. RHP Deivi Garcia (1-1, 3.06) starts for the Yankees.