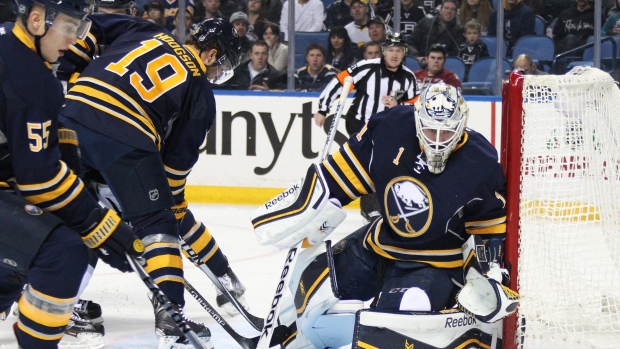 The Buffalo Sabres and Dallas Stars swapped goalies on Wednesday, with the Sabres sending Jhonas Enroth to the Stars for Anders Lindback and a conditional third-round pick in the 2016 NHL Draft.

According to TSN Hockey Insider Bob McKenzie, the condition on the draft pick is if Enroth wins four playoff games for the Stars, the Sabres get a second-round pick instead of a third. The Sabres are still guaranteed at least a third-round choice.

Enroth, 26, played five seasons for the Sabres and was 13-21-2 this year with a 3.27 goals against average. He began his career playing for then-Buffalo head coach Lindy Ruff, who is now behind the bench in Dallas.

"Jhonas is an extremely instinctive, experienced goaltender and head coach Lindy Ruff has a familiarity with his game," said Stars general manager Jim Nill in a statement. "Going down the stretch, where we have five more back-to-back situations, it was important for us to have a game-tested goaltender to help balance the workload."

Lindback, also 26, appeared in 10 games for the Stars this season with a 2-8-0 record and a 3.71 goals against average. He was a seventh-round pick of the Predators in 2008 and has appeared in 95 NHL games with Nashville, Tampa Bay, and Dallas.