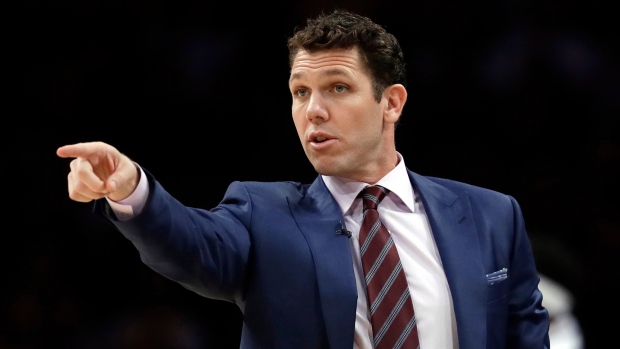 Sacramento's Luke Walton became the first coach to win a challenge — a new option for coaches to use in the NBA this season — when he asked for a review of an out-of-bounds call during the third quarter of the Kings' game against the Indiana Pacers in Mumbai, India.

Review showed that Walton was right and the Kings retained possession. About a minute later, Pacers coach Nate McMillan wanted a review of a goaltending call made against Indiana centre Myles Turner — and he, too, was proved correct, resulting in a jump ball at midcourt instead of two points for the Kings.

So Mumbai becomes the answer to a trivia question — the site of the first successful NBA coaches' challenge. The Pacers and Kings wrapped up a two-games trip to India, the NBA's first two games played in that country, with Indiana winning 130-106 to complete a sweep of the series.

"Thank you India for allowing us the opportunity to make history...thankful to be a part of this moment," Sacramento's Richaun Holmes tweeted postgame.

Coaches may challenge one call per game, provided what they're challenging meets certain criteria and if they have a timeout remaining. The timeout is charged if the challenge is unsuccessful, and the challenge isn't retained even if it results in a call being overturned.

Alize Johnson scored 17 points to lead eight Pacers in double figures, and Indiana scored 46 points in the second quarter alone on the way to the easy win.

Aaron Holiday scored 16 points and JaKarr Sampson had 15 for the Pacers. They outrebounded Sacramento 51-35 and had 35 assists on 49 field goals.

At San Francisco, Anthony Davis had 22 points and 10 rebounds in his preseason debut — playing only 18 minutes, all in the first half — for Los Angeles and the Lakers opened Golden State's new Chase Center with a win.

LeBron James had 15 points and eight assists in 18 minutes for the Lakers. JaVale McGee made all five of his shots for 10 points and grabbed 13 rebounds.

Stephen Curry scored 18 points for the Warriors. Jordan Poole added 17 for Golden State, which was just 11 of 42 from 3-point range.

Davis had the first points — preseason points, anyway — in the arena's history, putting in the rebound of a miss by James 1:13 into the contest.

At San Antonio, Orlando outscored the Spurs 41-17 in the third quarter to turn a close game into a runaway.

Mo Bamba had 18 points for the Magic, while Aaron Gordon and Terrence Ross each had 14.

Dejounte Murray, playing in an NBA game for the first time in nearly a year after missing all of last season with a knee injury, had 11 points in 14 1/2 minutes for San Antonio. Bryn Forbes led the Spurs with 24 points, going 5 for 6 from 3-point range.

Donovan Mitchell, Rudy Gobert and Mike Conley — who was acquired via trade from the Memphis Grizzlies in July — did not play (rest) for the Jazz.