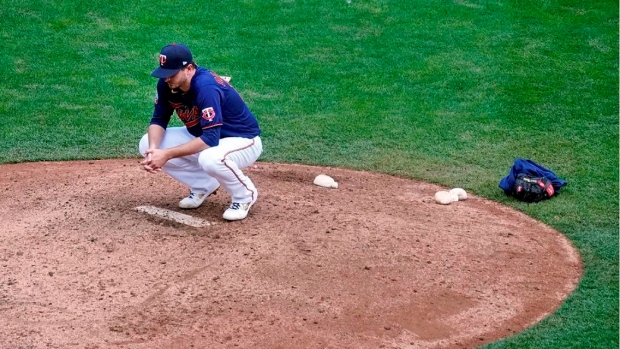 MINNEAPOLIS — After taking a second straight division title by winning at a 60% rate during the regular season, the Minnesota Twins experienced no reward in the playoffs, only that familiar autumn exasperation for the franchise and those who follow it.

The Twins, whose last World Series championship was 29 years ago, stretched their post-season losing streak to an all-time record 18 straight games in a two-game sweep by the Houston Astros in the AL wild card series completed Wednesday. The Twins have also lost nine straight rounds, the second-longest skid in history behind the Chicago Cubs (1910 to 1998).

“I see no reason and nothing stopping us from having a ton of success the next time we get an opportunity to go and do this,” he said. “We have all of the pieces. We have the right people, and I’ll tell you what: This organization from top to bottom is a group of people that, if you knew them, you would believe in them.”

Like most sports franchises in the data-driven era, the Twins have created a culture and a system around their clubhouse and front office they believe will consistently produce teams that can contend for and win in the post-season. At some point, though, following the process has to be accompanied by an ability to turn it into the desired result.

“None of us slept well last night. None of us are probably going to sleep well for a little while now because we really wanted to give ourselves the chance to break that streak,” said President of Baseball Operations Derek Falvey.

The Twins accomplished the most important goal in this topsy-turvy year, managing to avoid any COVID-19 outbreaks after a four-month pause led to the jarringly short 60-game schedule that required a lot of confinement in apartments and hotels and too much time away from families.

The on-field injuries remained a significant issue. Baldelli was rarely able to use his first-choice lineup, and two big blows came at an inopportune time. Third baseman Josh Donaldson's nagging right calf soreness kept him out of the playoffs, and centre fielder Byron Buxton's unspecified post-concussion ailment stuck him on the bench to begin the second game on Wednesday.

Donaldson, who signed a four-year, $92 million contract in January, did not get off to a good start with his new team while missing 32 of a possible 62 games this season because of the muscle trouble that has hampered him throughout his decorated career.

“We’ve already talked to Josh about ways to get ahead of this going into next year,” Falvey said. “This was an unorthodox season obviously in terms of getting ramped up, getting ready to go.”

After setting the major league record with 307 home runs in 2019, the Twins finished sixth in baseball in homers during the abbreviated schedule but saw their slugging percentage drop from second-best (.494) to the 14th-highest (.427).

Including the last three games of the regular season and the playoff series, the Twins went five games without a home run for their longest such streak in five years.

“We have been power reliant. There are other teams who are power reliant and winning as well in the playoffs. We just need to think through what didn’t allow us to get things going as best we could over the last couple days,” Falvey said.

Overall, after batting 18 points above the league average in 2019, the Twins were three points below the mean in 2020, a trend that stood out in an ugly way against the Astros with only two runs and seven hits over the two games.

The Twins have 10 players eligible for free agency, with right-hander Jake Odorizzi, who was limited to four starts due to multiple injuries, the most notable name on the pitching staff. Odorizzi, who was on the roster but did not pitch in the series, lingered in a crouch at the mound after the game, sifting some of the dirt through his fingers.

“If it’s farewell, it’s closure. If it’s not, it’ll be see you later, see you next year,” Odorizzi said.

The most prominent pending free agent is designated hitter Nelson Cruz, who led the team in home runs and batting average among players with a qualifying amount of at-bats for the second straight season. The 40-year-old Cruz, who has 37 career post-season RBIs in 46 games, the third most among active players, said he hopes to be back.

“We do remain interested in bringing him back, for sure,” Falvey said.