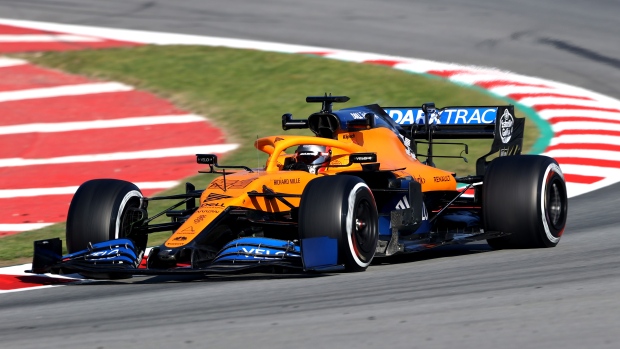 PARIS — Carlos Sainz Jr. will drive for Formula One team Ferrari next season and Daniel Ricciardo will replace the Spaniard at McLaren.

The 25-year-old Sainz Jr. will join Ferrari on a two-year deal starting next year, the Italian team said in a statement Thursday, shortly after McLaren announced Ricciardo's arrival from Renault.

“I am very happy that I will be driving for Ferrari in 2021 and I’m excited about my future with the team,” Sainz Jr. said. “I still have an important year ahead with McLaren Racing and I’m really looking forward to going racing again with them this season.”

The first 10 races of the season have either been postponed or cancelled amid the coronavirus pandemic.

Sainz Jr., the son of two-time world rally champion Carlos Sainz, will replace Sebastian Vettel. The four-time F1 champion is leaving Ferrari at the end of his contract.

Vettel struggled at times to compete against Charles Leclerc, even though Leclerc was only in his first season with Ferrari and his second in F1. The 22-year-old Leclerc is contracted to Ferrari until the end of 2024 and, with Vettel gone, is now the team's No. 1 driver.

Despite not having a world champion behind the wheel — like Vettel and Kimi Raikkonen, or Fernando Alonso before them — Ferrari hopes a younger driver pairing has a galvanizing effect.

“We’ve embarked on a new cycle with the aim of getting back to the top in Formula 1. It will be a long journey, not without its difficulties, especially given the current financial and regulatory situation," Ferrari team principal Mattia Binotto said. “A driver pairing with the talent and personality of Charles and Carlos, the youngest in the past 50 years of the Scuderia, will be the best possible combination to help us.”

Both drivers will be hungry: Leclerc to challenge for the world title, Sainz Jr. to show he can compete alongside him.

“I also want to pay tribute to Carlos for the excellent job he has been doing for McLaren in helping our performance recovery plan,” McLaren chief executive Zak Brown said. “He is a real team player and we wish him well for his future.”

“Signing Daniel is another step forward in our longterm plan and will bring an exciting new dimension to the team, alongside Lando," Brown said. “This is good news for our team, partners and of course our fans.”

Despite his lack of experience, Norris has shown a cool head under pressure on race day.

Renault has not yet said who will replace Ricciardo next year.

The 30-year-old Australian had a difficult time last season, his first with the French manufacturer after making a surprise move from Red Bull. He managed only one fourth-place finish and placed a lowly ninth in the standings.

Among those touted to replace Ricciardo are Nico Hulkenberg, who lost his Renault seat this year to Esteban Ocon, Alonso, and Vettel.

Although Alonso is 38 years old, the Spanish driver won his two world titles with Renault.