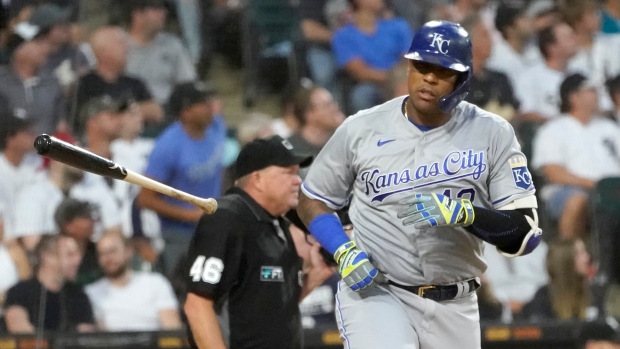 Kansas City ended a four-game losing streak, while the AL Central-leading White Sox lost for the eighth time in 13 games.

Royals starter Carlos Hernández (3-1) yielded only two hits over five innings in beating the White Sox for the second time in seven days. Hernández has allowed six hits while striking out 10 in his last 11 innings against Chicago.

Pérez launched his 27th homer in the third, tying a career high previously accomplished in 2017 and 2018.

“Seriously, I don’t think about it,” Pérez said. “I worry more about my defense and try to call a good game.”

Edward Olivares hit his second homer in three games, a solo shot in the second off Chicago starter Lucas Giolito. Michael A. Taylor led off the fourth with a homer against Giolito (8-8) and made a diving catch in center field to rob Cesar Hernandez of a hit in the sixth.

Taylor snapped an 0-for-14 slump with a drive that struck the left-field foul pole.

The Royals had managed only two runs on 12 hits in their previous three games before scoring in each of the first four innings.

Giolito gave up three home runs in four innings and lost for only the second time in his last seven home starts. The three homers allowed tied a season high and were one short of his career worst, against Minnesota on July 25, 2019.

It marked the third time this season Giolito permitted at least six runs. He was tagged for a season-high eight runs (seven earned) in one inning at Boston on April 19.

“I felt fine, but I made way too many mistakes, and they didn’t miss them,” Giolito said. “They just raked. I was pulling off pretty bad, with the slider especially. I was in between, and couldn’t get the good one going. It was either hanging or a ball in the dirt.

“Move on. It (stinks) because I’m the reason we lost tonight. It’s a brutal feeling, but just use that as motivation for the next one.”

Ryan O’Hearn, who hit a sacrifice fly in the first, added a two-run homer off reliever Jose Ruiz in the seventh.

Whit Merrifield had three of the Royals’ 12 hits. Merrifield’s two-out single scored Nicky Lopez in the second and snapped the team’s 0-for-26 stretch with runners in scoring position.

Pérez has played in all 106 games for the Royals this season. His 84 starts behind the plate are one behind Christian Vazquez of the Red Sox for the league lead among catchers.

“It’s pretty incredible what he’s doing as a catcher in the Kansas City heat in the summer,” Merrifield said.

Hall of Fame announcer and former White Sox general manager Ken “Hawk” Harrelson revealed he and current Chicago manager Tony La Russa made their peace seven years after Harrelson fired him in the middle of the 1986 season. Harrelson, who threw out the ceremonial first pitch, spoke with La Russa for several minutes before Wednesday night’s game.

“The first thing I like is Tony La Russa,” Harrelson said. “I didn’t fire him because he was a bad manager. Only he knows and I know why, and it’s going to stay that way.”

Royals: INF Emmanuel Rivera returned from his rehabilitation assignment and was reinstated from the 10-day injured list. Rivera had been sidelined since June 30 due to a left hamate fracture. ... RHP Kyle Zimmer was placed on the IL due to neck/trap spasms. ... OF Andrew Benintendi (left shoulder strain) reported improved strength and range of motion. Benintendi has yet to perform baseball work, manager Mike Matheny said. Benintendi injured his shoulder on a slide into second base Tuesday night.

White Sox: 3B Jake Burger was placed on the seven-day injured list by Triple-A Charlotte. Burger batted .263 in 38 at-bats for the White Sox before he was optioned on July 26.

Lynch allowed three runs over six innings Friday in a 6-3 loss at Toronto. Keuchel couldn’t hold a 6-1 lead Saturday as he allowed three home runs in 5 1/3 innings and left with no decision as Chicago lost 12-11 to Cleveland.