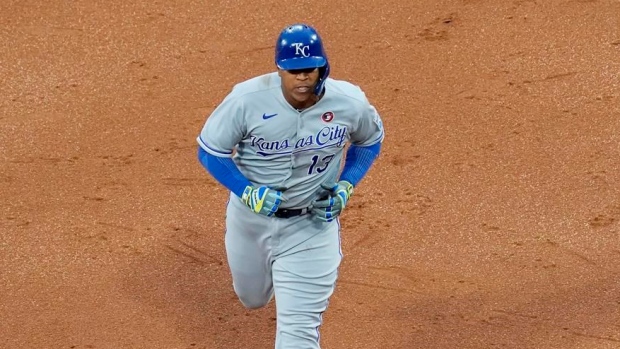 CHICAGO (AP) — Salvador Perez hit a three-run homer for the second straight day, and the Kansas City Royals handed Carlos Rodón his first loss of the season with a 5-1 victory over the Chicago White Sox on Saturday night.

Whit Merrifield had two hits and scored twice as the Royals got to Rodón (5-1) for four runs in the first three innings. The left-hander allowed two earned runs in 31 innings while winning his first five starts of the year, including a 3-0 victory at Kansas City in his previous start on May 7.

The big blow was Perez's ninth homer, an opposite-field drive on a 96-mph fastball up and out of the zone in the third. The veteran catcher also hit a three-run shot during Kansas City's 6-2 victory over Chicago in the opener of Friday's doubleheader.

The early run support was more than enough for Mike Minor (3-2), who pitched seven innings of two-hit ball in his first win since April 23. The left-hander struck out seven and walked two.

He got some help from his defense when Jarrod Dyson robbed Andrew Vaughn with a terrific catch in left for the second out of the seventh.

Carlos Santana homered in the ninth for Kansas City. Scott Barlow and Josh Staumont each got three outs, finishing a four-hitter.

The AL Central-leading White Sox dropped to 22-2 since the start of last season when their opponent starts a left-handed pitcher. Their only other loss occurred on April 11 when Minor got a no-decision in Kansas City's 10-inning victory.

José Abreu accounted for Chicago's only run with his eighth homer on the ninth pitch of his at-bat in the fourth. The drive to left gave him 33 RBIs on the year and 704 for his career, snapping a tie with Magglio Ordóñez for 10th on the franchise list.

Abreu was back in the starting lineup after he got hurt in a collision with Kansas City’s Hunter Dozier in Game 1 on Friday. The reigning AL MVP suffered a facial bruise and cut, along with a bruised left knee. Tests for a concussion were negative.

The White Sox announced they have passed the 85% COVID-19 vaccination threshold for Tier 1 players and staff. That means some of MLB’s coronavirus protocols will be relaxed for the team, including some movement restrictions on trips.

White Sox: C Zack Collins was shaken up after he was hit by Santana's backswing in the first inning. But Collins stayed in the game.

Right-handers Brady Singer (1-3, 4.18 ERA) and Dylan Cease (2-0, 2.80 ERA) start the series finale Sunday. Singer struggled in his previous start for Kansas City, allowing four runs and seven hits in 3 1/3 innings in a no-decision at Detroit. Cease is 2-0 with a 1.50 ERA in his last three starts for Chicago.