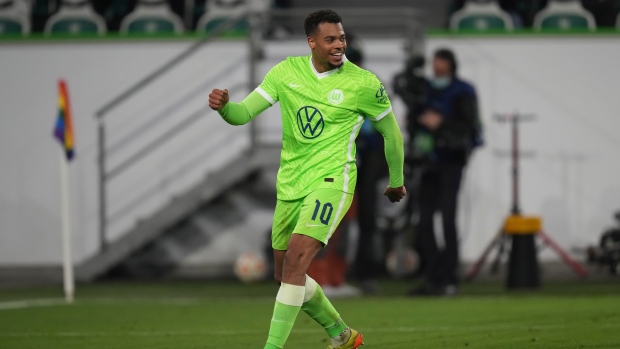 WOLFSBURG, Germany (AP) — Salzburg was made to wait to secure qualification for the Champions League knockout rounds after losing 2-1 at Wolfsburg on Tuesday.

A win would have made Salzburg the first Austrian club in the last 16 since Sturm Graz in the 2000-01 season but instead Lukas Nmecha scored the winning goal for Wolfsburg to reignite its own bid to qualify from Group G.

The German club needed less than three minutes to take the lead as right wing-back Ridle Baku arrived late at the far post to meet a low cross from Yannick Gerhardt.

Center back Maximilian Wöber showed off his credentials as a set piece specialist to level the score, curling a free kick over the Wolfsburg wall in the 30th minute, with goalkeeper Koen Casteels slow to react.

Wolfsburg had a chance to retake the lead soon after, but Wout Weghorst jabbed a cross over the bar while playing just a day after his return to training following a two-week quarantine period for a positive coronavirus test.

Compared to Weghorst, Nmecha had much more to do when he picked up a lobbed pass in the 60th and was pushed wide by his marker Wöber, but showed skill to lash the ball into the net from a tight angle. Salzburg had more shots on goal and pushed Wolfsburg hard in the search for a second equalizer, but the German team held on.

“We executed our game plan and that’s why we’ve won. Tonight came down to our undeniable will to win,” Wolfsburg's Baku said.

It was the first European game for new Wolfsburg coach Florian Kohfeldt, who got the job last month when his predecessor Mark van Bommel was fired following a winless run including a 3-1 loss in the first game at Salzburg.

Lille beat Sevilla 2-1 in the other game in the group Tuesday. That leaves Salzburg still top with seven points, two ahead of Lille and Wolfsburg, with Sevilla last on three points.