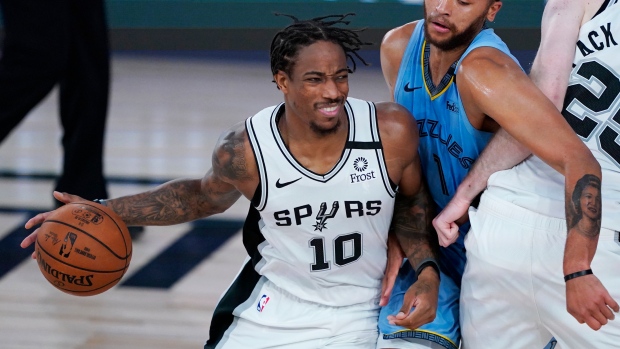 LAKE BUENA VISTA, Fla. — DeMar DeRozan made two free throws with a second to play, giving the San Antonio Spurs a 108-106 victory over the Memphis Grizzlies on Sunday that moved them into ninth place in the Western Conference.

The Spurs built an 11-point lead in the fourth quarter but needed a bunch of big plays down the stretch from DeRozan after the Grizzlies rallied.

“He’s a superstar in this league, one of the top players in this league,” the Grizzlies' Ja Morant said. “I feel like that’s a good job. I’m not surprised at all that he goes out and delivered for his team late in the game at all.”

DeRozan brought the ball down court after Jaren Jackson Jr. had tied the game for Memphis with a corner 3-pointer with 10.6 seconds to play. DeRozan pump-faked Dillon Brooks into the air and drew the foul, then knocked down the foul shots.

Jackson missed a long 3 on the final possession.

“We just kept playing,” Spurs coach Gregg Popovich said. “We went to the next play, and that was the best part of the deal. We made it tough on ourselves in several different ways, but they kept playing, and that’s what’s important.”

The Spurs are trying to qualify for the post-season for what would be an NBA-record 23rd consecutive season. They arrived at Walt Disney World in 12th place in the West, but after victories over Sacramento and Memphis are just two games behind the eighth-place Grizzlies.

Murray had 21 points and 10 rebounds for the Spurs. Derrick White added 16 points and DeRozan had 14.

The Memphis loss clinched a playoff spot for the Dallas Mavericks.

Murray scored 10 points in the fourth quarter, with a strong start to the period that had the Spurs up 11 near the midpoint. Memphis cut that to one before DeRozan scored with 59 seconds remaining. After a turnover by Morant, DeRozan knocked down a jumper for a 106-101 cushion with 22 seconds to go.

The veteran later missed two free throws that helped Memphis tie it. But the Grizzlies fell short again, just as they did by falling to Portland in overtime in their first game of the restart.

“Again, I want to say give our guys credit for competing in the second half, but that’s not good enough,” Grizzlies coach Taylor Jenkins said. “We’ve got to be better for 48 minutes. I think these guys are quickly learning that after two games.”

Spurs: Patty Mills played after sitting out the opener but Marco Belinelli missed the game with a sprained left foot. ... Popovich said the Spurs would have to wait and see if Bryn Forbes (right quadriceps) would be available for any of the restart.

Grizzlies: The game was the second of three in four nights to being the start for Memphis. The Grizzlies play New Orleans on Monday. ... Brooks scored 16 points.