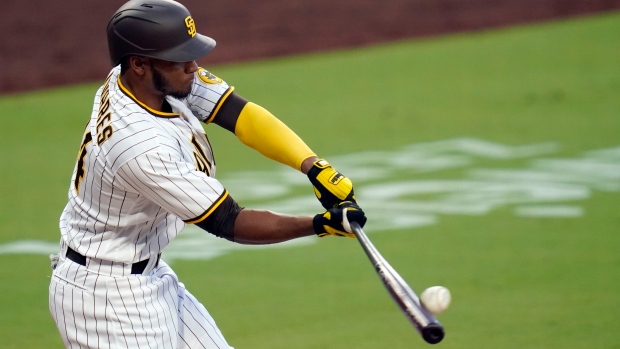 Davies took a perfect game into the fifth before giving up consecutive one-out singles to Eduardo Escobar and David Peralta. He got out of the jam by retiring the next two batters on popups.

Davies (2-1), obtained along with outfielder Trent Grisham in an off-season trade with Milwaukee, allowed three singles in 5 2/3 innings, struck out six and walked none.

“I tried to stay at the bottom of the zone as much as I possibly could tonight," Davies said. “Being able to locate there is a huge success. That’s where I tried to take my game. Didn’t stray from that. Live on the edges, the defence was there, we got enough to win the game 3-0.”

The game took only 2 hours, 27 minutes, and Davies’ efficiency had a lot to do with that.

“Staying at the bottom of the zone, trying live on soft contact, strikeouts are great but at the same time my goal is to try to get guys out as quick as possible," he said.

Four relievers finished the combined four-hitter for San Diego's first shutout. Kirby Yates pitched the ninth for his second save in as many chances.

The Padres have beaten the Diamondbacks four times in five games this season. San Diego came in having lost four of five.

Tatis homered on Luke Weaver’s first pitch of the game, driving a 93 mph fastball into the Padres’ bullpen beyond the centre field fence. It was his fifth this season and the seventh leadoff homer of his career. He has homered in consecutive games and in three of the last four.

He has reached base all 14 games this season, matching his career single-season best. He’s been on base 15 straight times dating to his last game of 2019, Aug. 13. He was shut down after that with a stress reaction in his lower back. He still finished third in the NL Rookie of the Year voting.

“First pitch home run to left-centre, I mean, there's really no better way to get a dugout going," Cronenworth said of Tatis' homer. “Right after Davies had a first inning that was awesome, to have that, every night it seems like every night he's doing something to get the guys going,”

Said Weaver: “That first pitch of the game is always something in the back of your mind you know you’ve got to execute. I had a good feeling he was going to be swinging. I know he’s pretty aggressive on the first pitch. The ball just got away from me a little bit ... He got a hold of that one.”

Davies said Tatis' homer “sets the tone for the offence and shows the guys are ready. Tatis is that type of player. Everybody knows about him. Keep the ball down, don’t give him anything to hit. That was a mistake, just trying to get a strike where he’s ready to hit.”

Cronenworth homered to right on the first pitch of the second, his second. He has impressed the Padres with his bat and glove in filling in for first baseman Eric Hosmer, who is on the injured list with a stomach ailment.

Olivares, pinch-hitting for Abraham Almonte, connected off Alex Young leading off the fifth for his first big league homer.

“Obviously a frustrating night because we had a lot of momentum coming in here," Diamondbacks manager Torey Lovullo said. "I thought offensively we were really prepared. We walked in here feeling good about scoring some runs. You get shut out, it’s not something you really want to watch or go through from a player’s standpoint. So we’ve got to regroup the troops, have a good approach tomorrow and see what that can lead to.

“We clipped Luke Weaver a little short," Lovullo said. "I know there’s probably a lot of curiosity about that. It was by design and then the bullpen took over from there.”

Lovullo said the Diamondbacks limited Weaver because he's struggled in the fourth and fifth innings of outings.

“It's part of the game,” Weaver said. "We’re trying to win ballgames, trying to get guys in the right situations, the right spots in order to move on down the road and to be at their best. After some discussions, we felt like this was a good way to go. Ultimately Torey makes that decision. I just try to do the best I can to improve.”

Padres: Manger Jayce Tingler said there’s a good chance 1B Eric Hosmer will be activated from the injured list on Saturday. He’s been out with a stomach ailment.

Diamondbacks: RHP Merrill Kelly (1-1, 2.63) is scheduled to start Saturday night. He took a no-hit bid into the seventh inning at Texas on July 28. He was 3-1 with a 3.71 ERA in five starts against San Diego in 2019, including winning his MLB debut on April 1, allowing three runs in six innings of a 10-3 victory.

Padres: RHP Chris Paddack (2-0, 2.65) is scheduled to make his fourth start. He beat Arizona at home on opening day, throwing six scoreless innings in a 7-2 win.