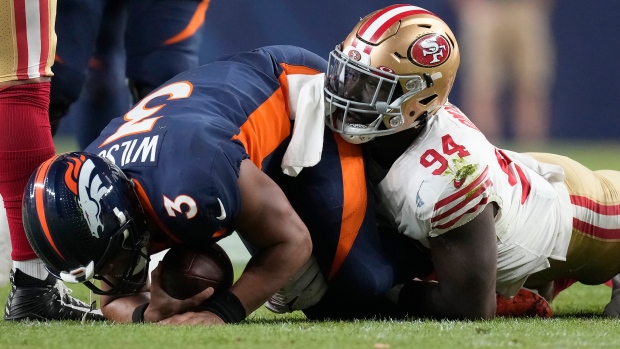 The San Francisco 49ers lead the Denver Broncos 7-3 after the first half of play in Denver on Sunday Night Football.

Each offence showed some glimpses of life through the first half, but the defences ran the show on the whole in a first half that included a combined 10 punts and just two scoring drives.

Jimmy Garoppolo, in his first start with the 49ers this season, completed 11-of-17 passes for 135 yards and a touchdown in the first half. Brandon Aiyuk caught three passes for 39 yards and the touchdown.

In his third start for the Broncos, new quarterback Russell Wilson continued to struggle with timing and routes with his new receivers. He completed 10-of-16 passes for 106 yards.

The Broncos were stuck at their own one yard line halfway through the second quarter but a couple of big rushing plays flipped the script.

The drive was stopped abruptly by a Talanoa Hufanga tackle six yards behind the line on a running play, an incomplete pass and a sack by Drake Jackson.

On the 49ers side, the offence was really stumped after the early touchdown. Their next three drives went for just 48, 24 and 12 yards, and each resulted in a punt.

Denver finally got something working in the second quarter with a long drive that featured two catches by Courtland Sutton that went for 41 yards - but fizzled in 9ers territory, as they settled for a Brandon McManus 55-yard field goal.

Slow start for the Broncos in the first quarter, as they failed to record a first down on each of their first three possessions.

San Francisco made some noise on their second possession of the game, including a 37-yard run by Jeff Wilson Jr., and capped the long drive off with a three-yard touchdown pass from Garoppolo to Brandon Aiyuk.

The teams traded short scoreless drives to open the game.