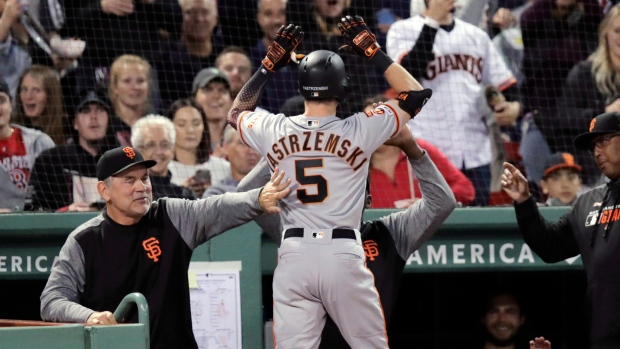 BOSTON — Mike Yastrzemski, grandson of former Red Sox great and Hall of Famer Carl Yastrzemski, hit a solo homer in his first game in Fenway Park, and Alex Dickerson had a pinch-hit sacrifice fly in the 15th inning to lift the San Francisco Giants to a 7-6 victory over Boston on Tuesday night.

Brandon Belt also had a solo homer for the Giants, who posted their first victory in Fenway after going 0-5 in interleague play. The New York Giants beat the Red Sox twice in the 1912 World Series, the year Fenway opened. They also defeated the Boston Braves in Fenway during the 1914 and '15 seasons.

The game featured a major-league record-tying 24 pitchers — including a team-record 13 by the Giants — and had 50 players overall, lasting 5 hours, 54 minutes. "Take Me Out to the Ballgame" was played in the middle of the 14th inning.

San Francisco manager Bruce Bochy, who is retiring at the end of the season, moved one win away from becoming the 11th big-league manager to reach 2,000 victories.

Donovan Solano opened the 15th with a ground-rule double against Trevor Kelley (0-2) and advanced on a wild pitch before the Dickerson's sac fly.

Dickerson (oblique) was not in the starting lineup. Bochy said before the game that he'd likely be in Wednesday, and, he was, pinch hitting at 12:50 a.m.

Brandon Crawford's RBI double had given the Giants the lead in the 13th before Boston's pinch hitter Juan Centeno drew a bases-loaded walk off Kyle Barraclough, the Giants' fourth pitcher of the inning.

Yastrzemski hit a 95.8 mph fastball from Nathan Eovaldi into the centre-field bleachers for his 20th of the season, getting a nice ovation as he rounded the bases when his shot made it 5-1 in the fourth. He finished 2 for 7 with a double, walk and three strikeouts.

Jackie Bradley Jr. hit a solo homer and drove in two runs for the Red Sox.

The Yastrzemskis walked Fenway's outfield grass before the game and Mike played left field, where his grandfather shined and captured seven Gold Gloves during his 23-year career, all with the Red Sox.

Bochy said it was an honour to meet Carl Yastrzemski before the game.

"I'm with a Hall of Famer that I grew up trying to impersonate as a hitter as a kid, and there he was in my office," he said. "That's a cool moment. I'm like anybody that grew up idolizing these guys when you have a chance to meet him."

Boston's Marco Hernández saved a run with diving stop on Donovan Solano's grounder in the 10th and CF Brady made a leaping grab on Belt's drive in the 12th.

Giants: Bochy said C Buster Posey "could use a day" because of tightness in back and hip area.

Red Sox: Manager Alex Cora said LHP David Price (cyst left wrist) could undergo surgery for it during the off-season. "That's something we're going to talk about," Cora said. Price hasn't pitched since Sept. 1. ... OF Mookie Betts missed his third straight game with inflammation in his left foot. ... J.D. Martinez was removed was left groin tightness and Sam Travis left after getting hit in the head — after his helmet popped off — by a throw on a headfirst slide into third on his triple.