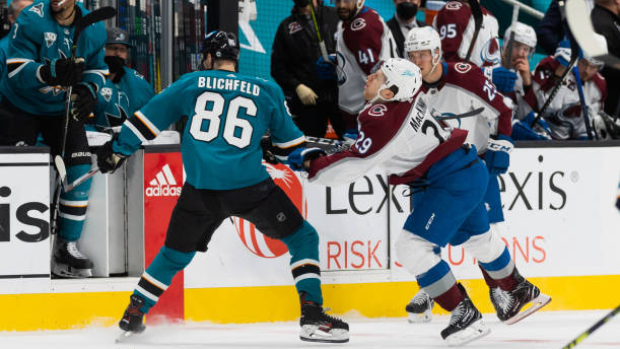 San Jose Sharks forward Joachim Blichfeld will have a hearing Thursday for an illegal check to the head of Colorado Avalanche centre Nathan MacKinnon.

Blichfeld was assessed a match penalty for the hit, which occurred at centre ice in the third period of Sharks' 4-0 loss to the Avalanche on Wednesday.

San Jose’s Joachim Blichfeld will have a hearing today for an Illegal Check to the Head on Colorado’s Nathan MacKinnon.

MacKinnon did not return to the game after the hit, but Avalanche head coach Jared Bednar said post-game it appeared he had avoided injury.

"I saw him coming off the ice. He was in the hallway. He seems to be doing good," Bednar said. "I think that we get lucky on it. Hopefully, he's feeling good and everything tomorrow but as of right now he seems to be fine."