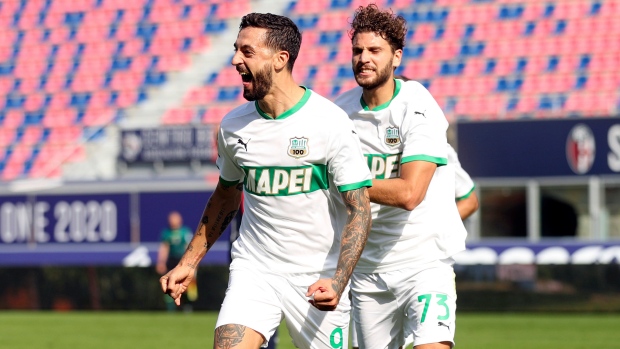 MILAN — High-flying Sassuolo scored three goals in 13 minutes to complete an extraordinary comeback from 3-1 down to win 4-3 at Bologna in Serie A on Sunday.

It was also the third successive match that Sassuolo had scored four goals. Sassuolo, Milan and Juventus are the only teams still unbeaten in Serie A.

It is Sassuolo's eighth season in the Italian top flight and the team has never finished higher than sixth.

In Bologna, Roberto Soriano gave the hosts an early lead but Domenico Berardi curled in an equalizer in the 18th minute.

However, Mattias Svanberg restored Bologna’s lead shortly before halftime and, when Riccardo Orsolini’s shot was deflected in on the hour, Sassuolo appeared to be heading for its first defeat.

But Francesco Caputo set up Filip Ðuricic in the 64th and scored the equalizer himself six minutes later.

The comeback was complete in the 77th when Bologna defender Takehiro Tomiyasu tried to prevent a ball from going through to Caputo and accidentally sent it into the back of his own net.

Edin Džeko scored his first two goals of the season as Roma came from behind to beat Benevento 5-2.

Benevento had won two of its opening three matches but it was still a surprise when it took an early lead through Gianluca Caprari.

But Pedro levelled in the 31st and Roma took the lead four minutes later. Goalkeeper Antonio Mirante gathered the ball and sent a long kick to Henrikh Mkhitaryan who threaded the ball through for Džeko to place into the bottom right corner.

Benevento was offered a way back into the game 10 minutes into the second half when Jordan Veretout fouled Artur Ioni?a and the visitors were awarded a penalty. Gianluca Lapadula saw his spot kick saved but he turned in the rebound.

Roma was awarded a penalty of its own when Benevento goalkeeper Lorenzo Montipò tripped Pedro. Veretout converted to make up for his earlier error.

Džeko doubled his tally in the 77th, finishing off a smart team move as Mkhitaryan rolled across for the Bosnia and Herzegovina forward to tap in from close range.

Substitute Carles Pérez capped a great night for Roma with a magnificent fifth. The former Barcelona player raced from inside his own half and beat three players before firing into the bottom corner.

Udinese picked up its first points of the season — and scored its first goals — with a 3-2 win over a depleted Parma side.

Ignacio Pussetto scored the winner a minute from time with a fine strike into the bottom left corner.

Samir had scored Udinese’s first goal of the season in the 28th to cancel out Hernani’s opener.

Parma defender Simone Iacoponi turned into his own net early in the second half to gift Udinese the lead before Yann Karamoh volleyed in the equalizer in the 70th.

Parma had seven of its players ruled out by the coronavirus.

The result means Torino is the only Serie A side still without a point after it lost 3-2 at home to Cagliari.

Andrea Belotti scored twice for Torino and came agonizingly close to completing a hat trick and snatching a point for Torino at the death but Alessio Cragno did well to save his acrobatic effort.

Fiorentina gave up a two-goal lead to draw 2-2 at Spezia.

The visitors went 2-0 up within four minutes thanks to goals from German Pezzella and Cristiano Biraghi.

But Daniele Verde pulled one back shortly before halftime and Diego Farias netted the equalizer in the 75th.