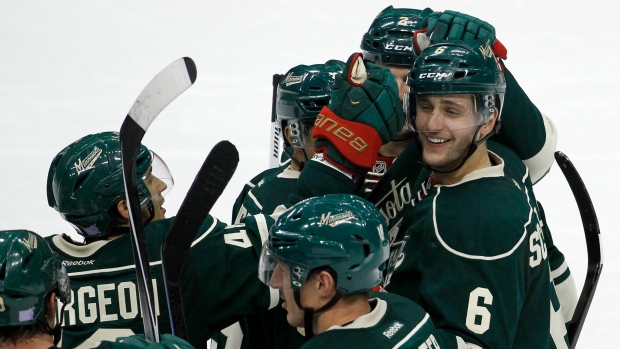 The Minnesota Wild got Zach Parise back from injury and Marco Scandella back from illness just in time.

Parise had two goals after missing five games with a concussion, and Scandella had the game-winner in overtime to give Minnesota a 4-3 victory over Winnipeg on Sunday. Minnesota blew a 3-0 lead in the third period before Scandella's low wrist shot from just inside the blue line beat Michael Hutchinson at 1:01.

Scandella said he didn't realize the puck went in until he saw teammate Jason Pominville's reaction.

Especially nice for Minnesota since the Wild was reeling after Winnipeg scored three goals in five minutes in the third. The Jets outshot Minnesota 22-14 in the second and third periods. Their physical play led to 14 penalties in the second period, eight against the Wild.

"We ended up being short-handed so many times that we just lost a lot of the rhythm on our game, and it's not the recipe we want to have," Wild coach Mike Yeo said.

Michael Frolik ended Niklas Backstrom's shutout bid at 5:55 with a wrist shot from the left side of the net. Then Evander Kane scored his second goal this season when his backhander from the bottom of the right circle bounced off Backstrom's pads and in between his legs at 8:19.

Less than three minutes later, Adam Pardy's shot from the point deflected off Andrew Ladd to make it 3-3 and fired up the loud contingent of Jets fans.

"I'm really, really proud the way they handled a couple of real bad breaks there in the first period that would have shattered most teams," Jets coach Paul Maurice said. "We got a little snarl on and fought our way back."

"It's frustrating to lose a game, especially when you came back and you came so close, but when you really look back on it you'll see a lot of positives from this road trip, how we really came together and battled," Hutchinson said. "Later on down the road this could be a huge point for us."

It didn't take long for Parise to give his team a lift — his first goal came at 4:11 of the first with Minnesota already up 1-0.

Parise's pass from the right circle caromed off Jets right wing Blake Wheeler past Ondrej Pavelec to make it 2-0. His second goal didn't come off his stick either. About 15 minutes later, Pavelec blocked Jared Spurgeon's shot, but the rebound hit off Parise's leg and went into the net to put the Wild up 3-0.

"However they go in," Parise said. "Looking back early in the year we weren't getting those type of bounces for our team. Hopefully they continue."

Nino Niederreiter, the Wild's leading goal scorer, gave Minnesota a 1-0 lead 2:07 into the game on a pretty wrap around that sent the puck around Pavelec's outstretched right leg and into the net.

Hutchinson replaced Pavelec to start the second period and finished with 15 saves.

Notes: Scandella scored his third goal of the season and prevented the Wild from losing their second game this year after losing a three-goal lead. . . Winnipeg entered the game allowing an average of two goals per game, tied for second in the league. . .Wild D Ryan Suter had a career-high eight penalty minutes after tallying four all season.. . Parise still leads Minnesota in points (six goals, six assists) this season, despite missing five games.