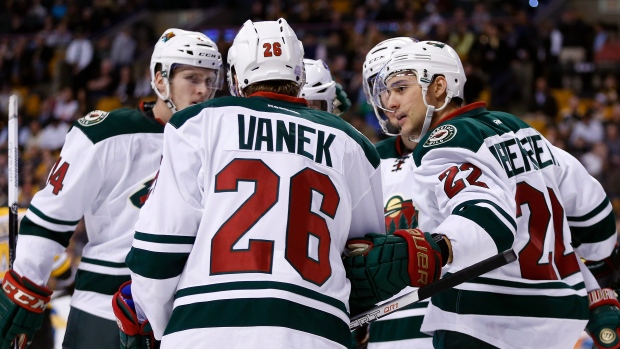 BOSTON - It was a difficult but rewarding split for the Minnesota Wild.

The Wild rallied with three goals in the third period and beat the Boston Bruins 4-3 on Tuesday night, easing the pain from the night before when Minnesota was at the opposite end of a surprising comeback.

"The way it all worked out, we're really not too disappointed. We learned a couple lessons on the trip," Wild coach Mike Yeo said.

Lesson No. 1 came Monday night in New York, when the Rangers scored five in the third period of a 5-4 win over the Wild. Having led that game 3-0 after two periods, a 3-1 deficit against the Bruins entering the third on Tuesday didn't seem so big.

Zach Parise and Justin Fontaine scored 2:13 apart for Minnesota early in the third to tie it, then Marco Scandella scored the go-ahead goal with 5:53 remaining as the Wild salvaged a split in their first back-to-back games this season.

"It happened to us in New York and we knew that we had a good game. We wanted to keep going and keep pushing and that's what we did in the third," Scandella said. "I felt like we had a lot of momentum and it was just bound to happen."

Parise said Yeo made some tactical adjustments in the second intermission and the Wild responded by coming out firing on Boston goalie Tuukka Rask.

"That's the way it goes. You get one and all of the sudden you get a little momentum and you start to feel good about it," Parise said. "The best thing is that the way we were playing paid off."

Rask faced 18 of Minnesota's 42 shots in the third period as Wild continued pressing through any fatigue lingering from Monday.

Niklas Backstrom stopped 25 shots for Minnesota and picked up the win despite allowing three straight goals by the Bruins. Rookie Seth Griffith scored in the first and second, then assisted on Milan Lucic's goal with 3:01 left in the second.

But the Wild controlled the pace in the third and capitalized on the absence of Boston defenceman Zdeno Chara, who is out 4-6 weeks with a knee injury.

"There's no excuse why we shouldn't have been the better team in the third, being fresh and all of that, but it shows character for them," Rask said. "That's how we like to win games."

The Wild had allowed just six goals all season before the collapse in New York on Monday, when the Rangers scored five in the third period while winning 5-4. It appeared to be happening again when Boston scored three straight on Backstrom, but the Bruins stalled in the third.

"They were down two goals. They came out hard. They put the puck deep and we weren't able to make a clean break out of there," said Boston's David Krejci, who set up Griffiths' first goal with a cross-ice pass to the crease. "They played well in the third period, but we played poorly."

Notes: Nino Niederreiter scored early in the first period for Minnesota. ... Thomas Vanek assisted on Minnesota's first goal, giving him 63 points in 56 games against Boston. ... Griffith had his first multi-point game one week after scoring his first career goal. ... Referee Dave Lewis was injured and left the game after taking a puck to the face in the first period.