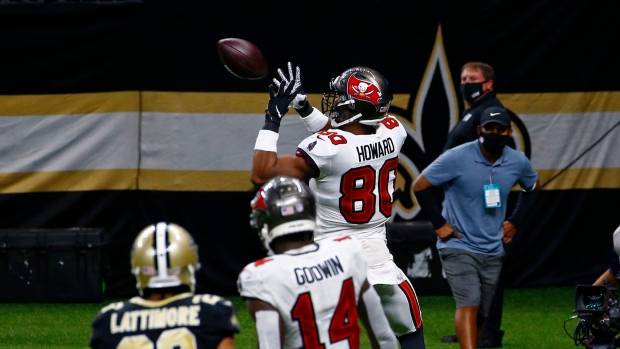 We knew that after skipping the entire preseason, Week 1 in the NFL was bound to produce plenty of surprises.

It did not disappoint.

A number of players flying under the radar popped up to produce big games.

I’m looking at you Michael Thomas.

Nevertheless, we’re now armed with a full week’s worth of data to scour free agency and add some impact players off the wire.

Here is a look at the top waiver wire options that might still be available in your fantasy football league.

Marlon Mack is done for the year with a torn Achilles, opening up an abundance of opportunity in the Colts backfield. Of course, rookie Jonathan Taylor is going to really benefit. However, don’t sleep on Nyheim Hines. The third-year back scored twice and racked up seven carries and eight receptions versus the Jaguars, playing 53 per cent of the offensive snaps. He’s basically this year’s version of Austin Ekeler in a Phillip Rivers-led offence. No quarterback targets his running backs more than Rivers (17 times in Week 1), making Hines a viable flex start every week.

Austin Ekeler in the first half: 0 targets pic.twitter.com/G4tRhrKQQh

Hines is currently available in 65.8 per cent of TSN fantasy football leagues. He should be a top waiver wire claim, especially in PPR formats.

We knew the Rams backfield was going to be crowded. However, after Week 1 it looks like Malcolm Brown is the clear frontrunner. Brown played 60 per cent of the offensive snaps in Sunday’s win over the Dallas Cowboys. He scored twice and finished with four more carries than rookie Cam Akers, including both L.A. rush attempts inside the five-yard line.

Make no mistake, Malcolm Brown didn’t just receive the most snaps. He’s been unquestionably the best running back on the Rams side of the ball tonight. Going to be one of the bigger waiver targets this week if you didn’t already grab him at the back of drafts.

James Robinson had a monopoly on the Jaguars carries Sunday, receiving all 16 versus the Colts. The rookie out of Illinois State was the only running back to earn 100 per cent of his team’s running back rushes. He also caught the lone target thrown his way.

Granted, he didn’t do much with his opportunity, but that kind of volume doesn’t grow on trees.

Robinson is available in 70.9 per cent of TSN fantasy football leagues and is worthy of a stash in deeper leagues.

It was a bit of surprise that Parris Campbell was the Colts’ leading receiver on Sunday. The sophomore receiver caught six passes for 71 yards on nine targets, and played the most snaps of any wide receiver for Indianapolis.

Campbell’s blazing 4.31 speed is a big reason why he is the No. 1 wide receiver waiver wire option this week.

Did someone say post-hype sleeper? Last year, O.J. Howard was a fifth- or sixth-round pick but failed miserably and scarred fantasy owners everywhere as a result. The Buccaneers brought in Rob Gronkowski in the off-season, but it was Howard who dominated at the tight end position against the Saints.

Howard out-targeted Gronk 6-to-4, catching four balls for 36 yards and a touchdown. Gronkowski may be on the field more due to his blocking prowess, but Howard is the more dangerous pass catcher.

While Gronk is owned in nearly 97 per cent of leagues, Howard is still available in 95.1 per cent of TSN fantasy football leagues.

The Washington Football Team lacks a true No. 2 receiver behind Terry McLaurin. However, tight end Logan Thomas looks like he may be able to fill the void. The converted quarterback played 74.2 per cent of the offensive snaps and led the team with a 26 per cent target share.

Tight end is one of the shallowest positions in fantasy football and Thomas looks like a viable bye week fill-in.

James Conner left Monday's opener with a sprained ankle, and his status moving forward is unknown. The team is hoping for a quick recovery, but if he misses any​ time Benny Snell Jr becomes an instant starting option.

Steelers’ RB James Conner suffered a sprained ankle tonight that will be examined Tuesday, but the team is, in the words of a source, “optimistic for a timely return.”

Snell dominated the backfield touches with Conner out, producing 113 yards on 19 carries. He'll likely cede passing down work to Jaylen Samuels, but he will get the lion's share of rushes and goal line opportunities. He's available in 85.4 per cent of TSN fantasy football leagues.