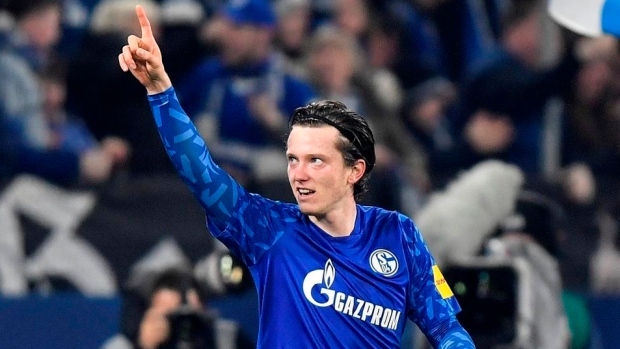 GELSENKIRCHEN, Germany — Michael Gregoritsch scored one goal and set up another as Schalke dealt a blow to Borussia Mönchengladbach's German title hopes in a 2-0 win on Friday.

In the Bundesliga's first game of 2020 after the winter break, Gladbach's defence was frequently overwhelmed by host Schalke's rapid team moves, especially on the counterattack.

After a string of first-half saves by Gladbach goalkeeper Yann Sommer kept the score 0-0 at the break, Schalke scored twice early in the second half to secure the win.

Gregoritsch took the ball out to the left flank in the 48th minute, stretching the Gladbach defence and opening up space in the middle. He then passed for Suat Serdar to charge through the gap in Gladbach's back line and score from the edge of the penalty area.

Ten minutes later it was Gregoritsch's turn to score, finishing off a counterattack which ran almost the length of the field, with a lay-off pass from Benito Raman.

"We had trouble the whole game with Schalke's movement. They put a lot of pressure on us and it was hard to play the ball out too. We gave them too much room," Sommer said in televised comments. “We had chances in the first half when we could have scored a goal, but in general we were not good enough today.”

As well as his key role in attack, Gregoritsch also made a key intervention in defence, clearing Marcus Thuram's header off the line in the 38th in what proved to be one of Gladbach's best chances.

"When it works like this, it's really great," Gregoritsch said, crediting Schalke's home crowd for the win. “We're at home and we can hit the gas pedal a bit more with the 12th man here.”

Starting in goal for Schalke due to a suspension for first-choice Alexander Nübel, Markus Schubert made a good reaction stop to deny Gladbach's Patrick Herrmann just before the break.

Gladbach stays two points behind leader Leipzig and can be overtaken by third-place Bayern Munich on Sunday if Bayern beats Hertha Berlin.

Gladbach was the surprise leader earlier in the season as its fans started to dream of a first German title since 1977 , but it's started to stall, having won just one of its last five games in all competitions.

Schalke moves up one place to fourth, overtaking its fierce rival Borussia Dortmund, which visits Augsburg on Saturday.