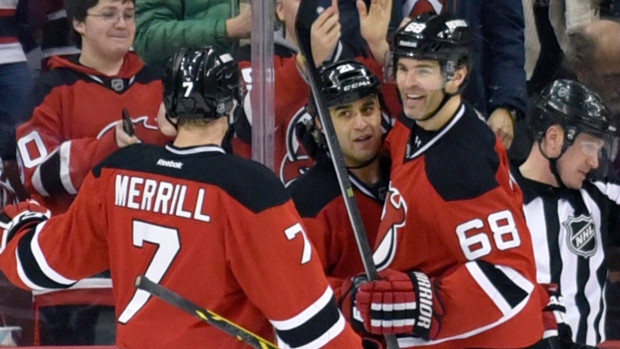 NEWARK, N.J. - Scott Gomez has played with some of the NHL's best goaltenders in his long career.

There was Martin Brodeur with the New Jersey Devils, Henrik Lundqvist with the New York Rangers and Carey Price with the Montreal Canadiens. In his second tour in New Jersey, Gomez believes Cory Schneider is now in that elite class.

Schneider had 38 saves for his third shutout of the season and the Devils posted their first four-game winning streak in two years with a 3-0 decision over the fading Arizona Coyotes on Monday night.

"He has been unreal," the 35-year-old Gomez said of Schneider. "It's almost like you take it for granted. It's like all those years with Marty or Lundqvist or Carey Price. You're kind of like that's what they are supposed to do because they are so good. He is at that level now. If he is not considered top three in the league, there is something wrong."

The win moved the Devils within eight points of a wild-card spot in their long shot bid to make the playoffs for the first time in three seasons. It also gave them points in 14 of their last 16 games at the Prudential Center (11-2-3).

Gomez scored on a first-period breakaway and Mike Cammalleri added breakaway and empty-net goals in the third period in the Devils' first win over the Coyotes since Dec. 15, 2010.

"We are getting teams that are below us in the standings, teams that we feel we should handle," Schneider said after the Devils posted their four-game win streak since early February 2013.

Mike Smith made 25 saves for the Coyotes, who lost their season-high sixth in a row.

Schneider, who has two shutouts and a 0.99 goals against average in five games against the Coyotes, was outstanding in stopping 28 shots in the first two periods. The only one that beat him was a shot from the point by defenceman Michael Stone midway through the first period, and it found iron.

"For me, when you are feeling good and seeing the puck, the game just has a good rhythm to it," Schneider said. "It was a fun game to play."

Schneider's best saves were a pad stop on Lucas Lessio on a 2-on-1 break early in the opening period, and another on Shane Doan coming out from behind the Devils' net. He also stopped a power-play point shot by Keith Yandle and a subsequent rebound attempt by Tobias Rieder.

Defenceman Marek Zidlicky helped out his goaltender in the second period, clearing a puck that Joe Vitale batted out of the air toward the net.

"I think this is where we are right now," Lessio said. "We have to find the net. We did what we needed to do to win the game. That's why this one is a real stinger. We gave it our best effort, but we have to find a way to start scoring goals, me included."

Schneider also had a glove save on Stone after the Coyotes pulled Smith with just over two minutes to play in regulation. Cammalleri iced the game after that.

"We think he is as good as they get," Cammalleri said of Schneider. "If we can do a good enough job in front of him, we feel we have a pretty good chance to win."

Gomez, who has been one of the surprises of the season since signing in December, picked up a loose puck in centre ice and beat Smith with a backhander in the first period. It was his fifth goal and gave him 23 points in 36 games.

Cammalleri, robbed twice by Smith in the game, got his breakaway after Mark Arcobello failed to keep the puck in the Devils' end early in the third period. Cammalleri beat Smith with a backhander up high for his team-high 21st goal.

NOTES: Veteran G Scott Clemmensen was recalled from Albany with Keith Kinkaid unable to play. Kincaid sustained a lower leg injury Saturday against Carolina. ...This was the opener of a four-game road trip for Arizona. ... Gomez's goal gave him 473 points with the Devils, moving him ahead of Bobby Holik for No. 5 in scoring in team history. ...With only two NHL games scheduled, there were 26 scouts and officials at the game between two teams that might be looking to unload players before next week's trading deadline on Monday. ... The Devils killed off all four power plays and have now gone 14 straight without giving up a goal. ... The Devils will play their fifth of a six-game homestand Wednesday against Calgary. The Coyotes are in New York to face the Rangers on Tuesday.