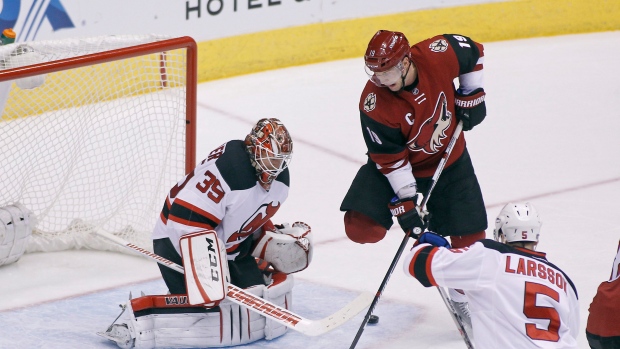 Schneider stopped 38 shots for his fourth shutout of the season, leading the Devils to a 2-0 win over the Coyotes on Saturday.

Schneider is 12-6-2 in 20 starts on the road this season and has three shutouts away from home.

His save total equaled a season high.

"I don't know if it's one thing or another, but I've just always felt good in this rink for some reason," Schneider said.

Saturday's effort wasn't easy, as the Coyotes had plenty of chances in the Devils' end, but New Jersey had Schneider and just enough offence to get the win.

Reid Boucher scored early in the first period for the Devils, who won for just the second time in the past seven games.

Kyle Palmieri scored his team-leading 18th goal of the season 18 seconds into the third period. Joseph Blandisi was able to get a stick on the puck behind the net and tap it out to Palmieri, who stuffed a close-range shot past Coyotes goalie Anders Lindback.

Arizona was shut out for only the second time in 44 games this season as the Devils blocked 27 shots.

"Big blocked shots, big box-outs, guys making plays at the front of the net," Schneider said. "Sometimes you just have to grind it out."

Lindback had 14 saves. It was his first start in goal for Arizona since giving up three goals on five shots in one period on Dec. 29 against Chicago. The Coyotes will return to Louis Domingue on Monday against Buffalo.

Boucher, recalled by New Jersey on Friday for his second stint in the NHL this season, opened the scoring with his first goal at 3:52 of the first period. Boucher has played in only four games with the Devils this season.

Former Coyote Lee Stempniak assisted on the goal for his 400th career point.

"I saw the (defenceman) lay down and I just wanted to get it on net," Boucher said. "It's a nice touch. It's even better that we got the win."

The Coyotes entered the game having scored on 7 of their past 14 power plays before going 0 for 5 against the Devils.

"We missed a lot of nets, they blocked a lot of shots. Territorially, we dominated the game but didn't do enough to win," Coyotes coach Dave Tippett said. "(Lindback) wasn't the issue. We couldn't score goals."

The Devils failed to score on the man advantage for the seventh straight game and are 0 for 17 in that stretch.

NOTES: Saturday's game was moved from the evening to noon local time with the NFL's Arizona Cardinals playing in a playoff game next door at University of Phoenix Stadium in a night game. ... Defenceman Kevin Connauton made his Coyotes debut after being acquired off waivers on Wednesday. Defenceman Jarred Tinordi, picked up in a trade with Montreal on Friday, was scratched, along with healthy scratches Viktor Tikhonov and Klas Dahlbeck. ... Devils F Bobby Farnham served the second of his four-game suspension and joined recently recalled C Brian O'Neill and C Stefan Matteau as scratches. ... Coach John Hynes said there is a good chance forward Mike Cammalleri returns to action Tuesday when the Devils face Calgary at home. Cammalleri has missed the past eight games with an upper body injury.