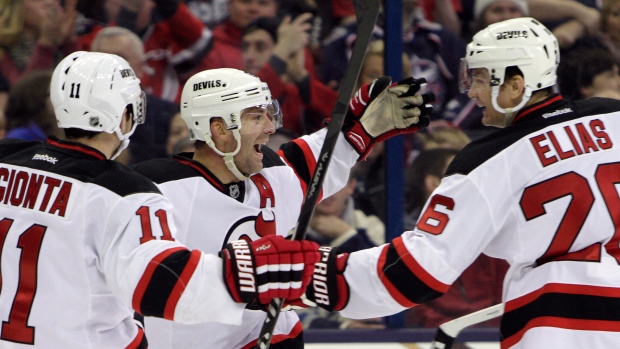 COLUMBUS, Ohio - It might not fill up a highlight reel, but Cory Schneider and the New Jersey Devils still considered this win a thing of beauty.

Andy Greene scored, Travis Zajac added an empty-net goal, and Schneider made 33 saves for his fourth shutout of the season to lead the New Jersey Devils past the Columbus Blue Jackets 2-0 on Saturday night.

"It wasn't always the prettiest game, but we did what we had to to get the two points," Schneider said after his 16th NHL shutout and second in four games.

Playing their lone road game in a 10-game, 23-day stretch, the Devils won for the first time in four away games. They had lost their previous two games overall, including Friday night's 3-2 overtime decision at home against Boston.

"We start with our goaltender and go through our defence and get to our forwards," Devils general manager Lou Lamoriello said. "Right now, that's sort of our asset, our strength. So you work off of that. Cory was once again outstanding."

Neither team could really afford a loss. New Jersey came in 12th in the East, nine points below the playoff cutoff. The Blue Jackets were four points behind the Devils in 13th, 13 points back and needing to jump over five teams.

"We're doing a better job of closing out (games)," Zajac said. "Our defence was good and Schneids was strong in front."

The Devils didn't record their first shot until almost 15 minutes had elapsed, but Columbus couldn't get anything past Schneider.

New Jersey netted all the goals it would need in the first period.

Patrik Elias slid a rink-wide pass to Greene, streaking up the left wing. His rising wrist shot from the left circle at 15:47 flew over the outstretched glove of Curtis McElhinney for the defenceman's second goal in his 63rd game this season.

"I got the pass from Patty and went wide," Greene said. "I was trying to put it on net there and found a hole."

McElhinney regretted his one lapse.

"I made some good saves, but at the end of the day it's that one missed opportunity that ended up deciding the game," he said. "That's the difficult thing to accept right now."

The Blue Jackets, who had the first eight shots, didn't have any over the final 9 minutes of the period.

Columbus was pressing late in the third — Schneider had turned away a shot by rookie Alexander Wennberg in the final minute — when Zajac scored his 10th goal to ice it.

"Once we got going and got that first goal, we really settled in nicely," Schneider said. "Sometimes you kind of have to grind out these road games on the back half of a back-to-back."

"You have to give them credit for how they played, having played last night," Blue Jackets coach Todd Richards said of the Devils. "We just weren't able to score. Defensively we were fine, but we didn't have the energy or the jump we needed to create that one goal."

David Clarkson made his Columbus debut after being acquired in a trade with Toronto for the injured Nathan Horton on Thursday. He played against a familiar foe, having scored 97 goals to go with 73 assists in 426 games with New Jersey before signing as a free agent with the Maple Leafs three years ago.

"We did a lot of good things," Clarkson said. "Of course, you always think you can do better. But the way we played in the first, and at times in the third, we can build off of that."

NOTES: The Devils didn't have a morning skate after getting in late after Friday's game. ... The Blue Jackets, now with an NHL-high 392 man-games lost to injury, got good news when Sergei Bobrovsky, the Vezina Trophy winner in 2013 as the NHL's top goalie, was activated off the injured list. After missing 15 games with a groin injury, he backed up McElhinney. ... Columbus welcomed back D Dalton Prout, who had missed nine games with an upper-body injury. But C Brandon Dubinsky didn't play due to concussion symptoms. ... The Blue Jackets were 0 for 3 on the power play and are just 2 of 45 in their last 17 games.