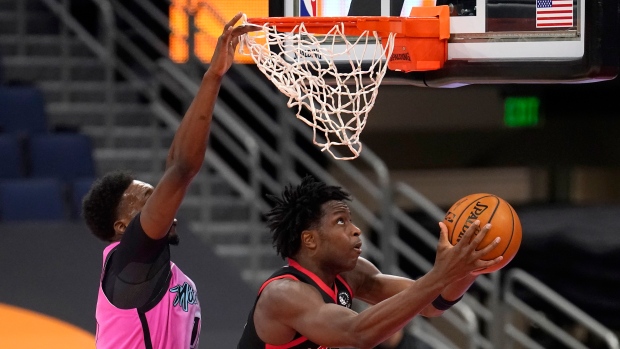 TORONTO – On a macro level, the Raptors’ offence has been fine – good, not great, but far from their most pressing concern.

Through 14 games, they’re scoring 110.4 points per 100 possessions, which has them ranked 13th in the NBA – slightly better than league average, and right on par with where they were situated last season.

For a club that prides itself on defence, getting to the bottom of the maddening inconsistency on that end remains a top priority, especially coming off a game in which it surrendered 111 points to a shorthanded Miami Heat team while gifting Duncan Robinson and Kendrick Nunn with wide-open jumper after wide-open jumper.

“That was the most defensive mistakes we had in the season, times three, last night,” Nick Nurse said on the heels of Wednesday’s loss, which snapped the Raptors’ three-game winning streak – highlighted by Monday’s defensive gem against Dallas – and dropped their record to 5-9 on the campaign.

The defence has come and gone, but one common denominator in most of the early-season losses, including this most recent defeat, has been the bad offensive quarter and lengthy scoring drought within it.

The Raptors have been held to 20 points or fewer in seven quarters so far this season, and in almost every instance those were fate-sealing stretches.

They were neck and neck with Philadelphia in a tight contest late last month before scoring 17 fourth-quarter points and suffering a tough loss. The January 2 game against Boston got away from them in the second quarter, when they managed just 14 points, and could never recover. Even in the first of two wins over Charlotte last week, their comfortable lead almost vanished with the Hornets outscoring them 22-12 in the fourth.

On Wednesday, Toronto went more than six minutes without registering a point early in the final quarter and scored just 19 in the frame. The culprit, same as it was in the near collapse to Charlotte last Thursday, was their inability to execute against the opposition’s zone defence.

Despite missing four rotation players – including Jimmy Butler, who remains in the league’s health and safety protocols, and Tyler Herro, out with a neck injury – you can expect a few things from an Erik Spoelstra-coached Heat team. You can expect them to play with toughness and physicality, and you can expect a heavy dose of zone, but the Raptors weren’t ready for it.

After an OG Anunoby dunk cut the deficit to three points early in the fourth, Toronto’s offence fell apart. They swung the ball around the perimeter, failing to penetrate the heart of the zone or create good looks from outside. They ate up clock, settled for tough shots and threw the ball away. When it was all said and done, they hit just six of their 21 field goal attempts, including 3-of-12 from three-point range, and committed five turnovers over the final 12 minutes.

“When it’s just pass, pass, pass, shot, three there’s going to be ups and downs with that, and unfortunately all our misses came at the same time,” said Fred VanVleet, who had a team-high 24 points but shot 1-of-4 in the fourth quarter. “I think [we] just [needed to] continue running our stuff, run our actions and try to put more pressure on the rim, maybe get some easier looks and layups around the rim and stuff [instead of] just kinda throwing it around and shooting threes… We just didn’t get good enough looks, I guess, or didn’t make them when we got them. And obviously when you do that against the zone it’s kind of a snowball effect, they get more aggressive and as an offence you kind of get on your heels a little bit.”

“It seems like the ball is getting a bit stagnant when teams are going to zone,” Chris Boucher said. “So I think we’ve got to get the ball moving, try to attack the zone. We’re waiting too much time before we attack it, so I would say get the ball moving, and we’ve always got to have somebody in the middle. We saw what happened when we all just stay on the perimeter and then everybody’s stagnant and everybody stays home. We’ve just gotta figure out a way to get open.”

After watching film, the team spent a portion of Thursday’s practice session working on different ways to attack the zone, according to Boucher. It’s something that they’ve focused on over the past week, and did a better of in the second game against Charlotte. They’ll get another chance to test themselves when they face Miami again on Friday.

That’s one of the benefits of the series model – a unique wrinkle in this season’s schedule, which allows you to play consecutive games against the same opponent in an effort to reduce travel. In this case, coming off a bad loss, the Raptors can go back to the drawing board, make adjustments, correct some things, and then see what they’ve learned – almost like a mini playoff series.

“It just gives you chance to get some retaliation,” said Boucher, who had his quietest game in weeks, scoring eight points and grabbing only one rebound against Miami. “For me, I didn’t feel like I had a good game so it just gives me a chance to play this team again and figure out a way to get better… You get a second chance to see what you can do and try to help the team another way, because yesterday was not it at all.”

Butler remains out for the Heat, along with Avery Bradley (virus protocols) and Meyers Leonard (shoulder soreness), while Herro is listed as questionable for Friday’s game. The Raptors may also be shorthanded, with Pascal Siakam’s status up in the air after he landed awkwardly from a dunk and tweaked a nagging groin ailment on Wednesday. He didn’t practice with the team on Thursday.

With or without Siakam – one of their most important offensive creators – it’s clear that Nurse and the Raptors will have to try something different if they hope to solve Miami’s zone. One thing that could help is the shooting of Matt Thomas, who is 7-for-13 from beyond the arc this season after hitting 48 per cent of his threes as a rookie last year.

Nurse admitted that he considered and was close to calling Thomas’ number a couple times in Wednesday’s loss, and while he ended up deciding against it in the moment, there’s a good chance we see the sparingly used sharpshooter in Friday’s rematch.

Since logging 47 minutes in the first three games of the season, Thomas has been a healthy scratch in nine of the last 11 contests. Nurse’s decision to roll with the more defensively proficient Stanley Johnson in his place isn’t as egregious as many fans – who are clamouring for Thomas – would have you believe. For starters, it’s mostly been an effective move, with Johnson providing a consistent source of defence and energy off the bench. And, given the team’s defensive shortcomings and guard-heavy roster construction, it makes sense that Nurse would prioritize a bigger wing defender that doesn’t give you much on offence over an undersized shooting specialist with defensive limitations.

Still, that doesn’t mean Thomas shouldn’t have a role this year. He has situational value as a zone buster or sparkplug when the offence gets bogged down.

If the Raptors are going to turn the corner and recover from their slow start to the season – and there have been some encouraging signs on that front as of late – they’ll have to address underlying concerns on both ends of the floor. However, unless and until the defence returns to form – to where it can mask some of those offensive lapses – the scoring droughts will continue to hold them back.