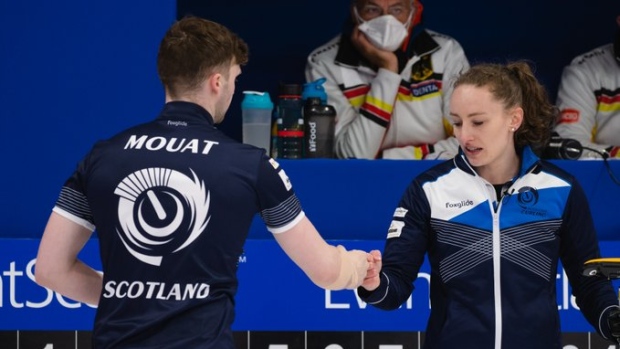 ABERDEEN, United Kingdom — Scotland took sole possession of first place in the Group A round-robin standings with an 8-5 win over Canada on Thursday at the world mixed doubles curling championship.

The host tandem of Jennifer Dodds and Bruce Mouat led 4-0 after the first two ends, and responded to Canada's three-point fifth end with a point in the sixth and a steal of one in the seventh.

The win improved Scotland's record to 6-1 and moved it out of a tie with Canada's Kerri Einarson and Brad Gushue.

Canada, which beat Italy 6-4 in Thursday's early draw, was tied with the Italians for second in the group at 5-2 .

Einarson and Gushue scored a deuce in the eighth and final end to break a tie against Italy's Stefania Constantini and Amos Mosaner.

The Italians rebounded with a 5-4 win over the Czech Republic in Thursday's late draw.