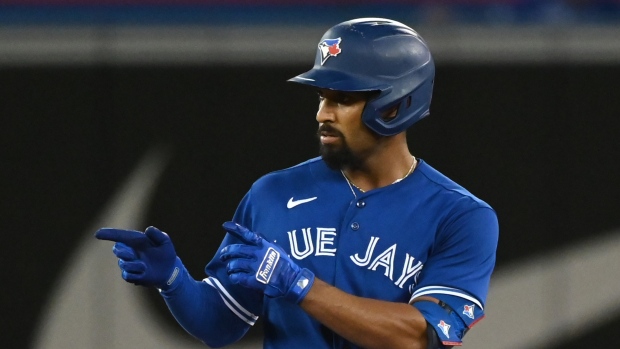 TORONTO — We were pretty sure we knew the answers already, but two very important positional questions were emphatically resolved in 2021: Vladimir Guerrero Jr. is now fully entrenched at first base, while Bo Bichette made enough strides defensively to continue to call shortstop home.

Now, the question is, ‘Who plays beside them?”

At this point, there are two very obvious holes in this Toronto Blue Jays’ lineup heading into the off-season, and they’re both on the diamond.

Third base was a question mark for most of the summer, and still is, while Bichette may need a new double-play partner after watching Marcus Semien do what every player on a one-year deal dreams of, as the 45 homers the veteran bashed has him in line for a nine-figure contract as a free agent this winter.

Nobody saw the Semien signing coming last January, and the Jays may have to think outside the box again this winter to find value.

If Semien walks, the up-the-middle position will be the priority.

“I think that we don’t have to do it, but I think it’s an area where we can [improve],” Jays GM Ross Atkins said of upgrading third base. “Between Cavan Biggio, Santiago Espinal, Breyvic Valera did a great job, Kevin Smith is an exceptional defender and had a remarkable year in Triple-A … there are ways for us to field teams without signing a third baseman, but it is an area that we will obviously be thinking about in free agency and trade.”

Here’s a look at some of the more intriguing free-agent infield options that would fit alongside Vladdy Jr. and Bichette.

I toyed with the idea of putting Corey Seager here, but even in the most optimistic view of what the Blue Jays have to spend this winter it’s truly impossible to envision them doling out the $300 million needed to secure the 27-year-old, who would then kick over to the hot corner to the right of Bichette and immediately become one of the best third basemen in the game.

The best chance of the Jays spending big money on an infielder is convincing Semien to stay atop a potent lineup and continue to play second base.

The odds of that happening are no better than 50/50 at this point.

With a trio of 3.0-plus fWAR seasons on his resume over the last four years, Escobar is a great fit for the Jays in a number of ways.

The first is that he’s been an adequate defender at third base over the course of his career, even if Baseball Savant’s Outs Above Average assigned him a minus-3 grade in 2021, the same glove mark that Biggio received for his work at the hot corner.

While that’s ominous, Escobar has generally been viewed as a solid defender at third, while also being able to dabble at second base.

That important versatility combined with the fact he’s a switch hitter will have the Jays checking in on a potential short-term deal for the soon-to-be 33 year old.

THE MOST LIKELY TARGET: Kyle Seager

Perhaps the cleanest fit for the Jays thanks to his left-handed bat and plus-4 Outs Above Average grade at third base last season — that mark was ninth-best at the position — Seager would immediately give Montoyo a solid everyday option.

He’s not going to hit for a high average, but the glove combined with the power — 20-plus homers in nine straight 162-game seasons — would make Seager a good fit in the bottom half of Charlie Montoyo’s lineup.

If Semien walks and an everyday solution fails to appear on the trade market, the Jays could decide to mix and match with Biggio, Espinal and perhaps another veteran.

Harrison enjoyed a resurgent 2021 campaign with a .279/.341/.400 slash line, and his ability to play third, second, short and some outfield is something the Jays are into.

He’s far from a game-changer, but Harrison is the type of player that finds a way to contribute in numerous ways.

The only drawback is he hits right-handed and doesn’t have much power, making him a bit redundant with Espinal.

It would’ve been a better comparable last winter when he was coming off an ugly .203/.238/.360 slash line during the shortened season, but if we’re looking for a free agent whose market could be slower than expected, Baez is it.

With several star shortstops on the market, someone might be left out in the cold in January, like Semien was a year ago.

Similarly, Baez won’t be attached to a qualifying offer thanks to his midseason trade to the New York Mets.

While he’s likely to have a number of lucrative multi-year offers to sift through, it’s not crazy to think Baez could take a one-year deal at the age of 29 in order to replicate what Semien did and test free agency once again next winter.

He’s already shown a willingness to shift to second base, as well, grading out as plus with the Mets no matter what metric you use.