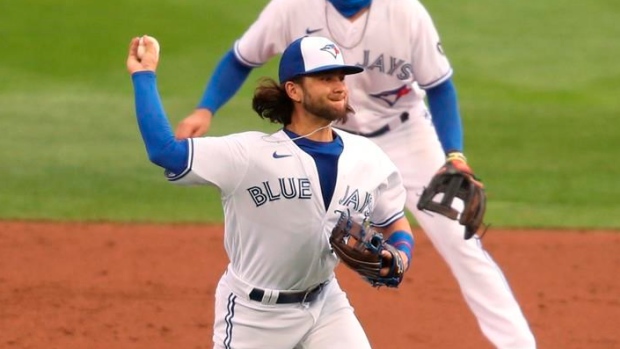 ​TORONTO — As Bo Bichette sat at home in Florida over the off-season, the Toronto Blue Jays were attached to just about every name, big and small, in free agency.

From luring George Springer to dabbling in the Trevor Bauer market for a time to just about every other free agent name you can think of, it was a busy off-season for both the rumour mill and the Jays’ front office.

There was also the attempt to trade for Francisco Lindor, one of the premier shortstops in the game. That one was very legit, and the Jays came oh-so close to winning the sweepstakes, before Cleveland finally decided the New York Mets’ package of mostly MLB talent was what they preferred to the Blue Jays’ prospect-heavy offer.

It was no secret Lindor would’ve bumped Bichette off shortstop to second base.

Considering the Jays front office has also checked in other other veteran shortstops like Didi Gregorius and Andrelton Simmons over the past two years, it has become very clear the organization isn’t exactly 100 per cent sold on Bichette’s future at the most import position on the field.

Bichette is getting that hint, too.

So he went to work.

While the Jays are going about their camp in pandemic seclusion this spring at their newly-renovated Dunedin complex, the club from top to bottom was quietly excited when the 22-year-old showed up in the best shape anyone has ever seen him in since the day he joined the organization in 2016.

“His arm strength looks a lot better than it did last year,” manager Charlie Montoyo said Monday after the club’s first full team workout of the spring, officially kicking off the daily grind for a young ball club with high expectations. “All credit to him, to what he was doing this off-season. If you see him right now, his legs, they’re huge.”

When Bichette arrived in the majors on a sweltering Kansas City afternoon the day after Marcus Stroman had been sent packing at the 2019 trade deadline, he talked about how proud he was that he was able to make it there as shortstop, after many had doubted that would happen on the way up.

Now, he’s ready to prove he can stay there for the long haul.

“Francisco’s a great player so the rumours aren’t something that are necessarily surprising, but for me, I’ve told you guys a bunch of times that I want to be a shortstop,” Bichette said. “I think that I could be a really good one and I’m going to put the work in to be one. For me, this off-season, I heard the rumours, but it was just all about continue to work as much I can at shortstop because I was still the shortstop at the time so nothing changed for me.”

Two errors in the final game of the season against the Tampa Bay Rays also didn’t sit well with the St. Petersburg, Fla., native, a spot he still calls home in the off-season.

He went into the winter with clear goals to get stronger and quicker on the defensive side of the ball.

That’s not an issue, evidenced by his career .307 batting average and .549 slugging percentage through his first 75 games, and there’s really no ceiling on where his numbers could go in the next few years.

After that tough postseason game, Bichette told Montoyo what he was going to do.

“That happens,” Montoyo said of the two miscues on the biggest stage. “The one good thing about this kid is if you challenge him, he’s going to do it. We challenged him and, actually, he brought it up that he needs to get better, and he did. He really looks a lot better than he did last year and it’s just great to see when you talk to somebody at the end of a season and he tells you what he thinks he’s going to do and he comes back and you see him at spring training and how much better he looks.

“The best teams in baseball, they all have a good shortstop and that’s a fact,” Montoyo added. “That’s why Bo Bichette’s going to be so good — because he said, ‘Yeah, I do need to get better.’ That’s what he did this off-season.”

It was ironic Bichette spoke to the media on the same day that the San Diego Padres were trotting new $340-million man Fernando Tatis. That type of pre-arbitration extension is something that president/CEO Mark Shapiro helped pioneer during his days in Cleveland alongside John Hart, so it’s going to be a part of his efforts to build a sustainable winner in Toronto, as well.

Bichette’s representatives and the Jays talked about it this off-season, but he says an offer hasn’t been placed in front of him.
“It was brought up but no offer, so I think I would rather focus on spring training and the season ahead, but we’ll see what happens,” Bichette said.
There’s no doubt the Jays will have interest, and Bichette will listen when the time is right.

The decision for the player is whether taking the long-term security is what they want or if they’d rather bet on themselves from season to season, go through the arbitration process and then either hit the free-agent market or force the Jays to ante up as he’s approaching it.

“I’m happy for Fernando,” Bichette said. “I’ve always admired the way he plays from the minor leagues until now, I mean, he’s an exciting player. I think it’s really powerful that an organization believed in him enough to put the commitment they did. Obviously, he’s probably still not going to get paid what he should have, but I think that it’s good for Fernando and I think it’s good for the Padres so that means good for baseball. On my end of things, I’m open, but there’s more important things with camp starting today and that’s where my focus is.”

From the perspective of the Jays’ front office, while they’d be eager to sign any of their young players to a pre-arb extension if they feel they’re getting a bargain, there’s a lot to learn about all of them in 2021, Bichette included.

Albeit very productive and exciting ones.

He’s a star in the making and, despite the addition of Springer and his $150-million deal, still very firmly entrenched as the face of the franchise.

That doesn’t need to change even if his position does. Following in the footsteps of Robbie Alomar at the keystone isn’t a bad outcome.

But it’s clear Bichette wants to play shortstop and he’s going to put up a serious fight to stay there in 2021.​