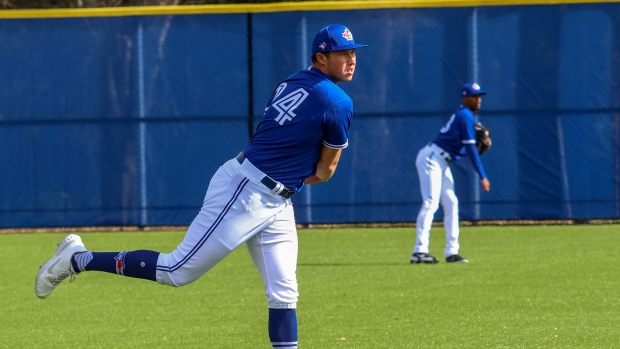 TORONTO — No matter the role, no matter the results, Nate Pearson is going to be one of the main stories all season long.

Maybe even more so in the second half of the season as the innings mount and a yet-to-be-publicly-revealed plan to manage the 24-year-old starts to really come into focus.

Speaking Friday afternoon from Dunedin, the Toronto Blue Jays’ top prospect and an arm so key to the club’s future rotation hopes allowed that they might have to get creative this season and the Florida native, who will be pitching close to home at TD Ballpark, has no illusions of shouldering a typical starting pitcher workload in 2021.

There are a few reasonable — and very smart — reasons for that, too.

It’s never a cut and dried situation when it comes to workload limits, but the Blue Jays will have to treat Pearson carefully to some degree this season because the next handful of years could be the important and valuable ones when this club makes further improvements and really starts setting its sights on a World Series ring.

The flexor strain that shelved the hard throwing righty for five weeks last summer and limited him to just 20 total innings, including a scintillating six-out postseason performance, was simply a reminder that a pitcher who has never surpassed 101.2 innings in a single season still needs to be handled carefully.

“I’m up for everything, but I think we’ve just gotta be smart about it,” Pearson said Friday. “Obviously coming off of a shortened year and we’ve got a long season ahead of us, I think the goal this year is to get as many innings as I can and to stay healthy all year. Those are the only two goals I have and I think the rest will take care of itself as we get going.”

For years, an innings limit meant letting a starter go out of the gates and then shutting him down when he got to that number.

The most famous example of that came in 2012 when the Washington Nationals ended Stephen Strasburg’s season in the middle of a postseason march after a Sept. 12 start and he finished with 159.1 innings.

That one was widely debated and nine years later the Nats may have divvied up those innings more creatively in order to use their prized pitching possession when it mattered most.

He has a screw in his elbow from a high school stress fracture and then dealt with the flexor strain last year.

Even if you took his innings total from the 2019 season, which was split between three minor-league levels, and conservatively added 30 frames, 130 isn’t close to a full season in the rotation if he’s pitching well and going deep into games.

In that 2019 season, the Jays used a creative schedule of limiting Pearson to five innings per start, followed by two innings, followed by five the next time out, and so on.

Pearson says there’s no set-in-stone plan that he’s heard of during the first week of spring training, with his first appearance scheduled for Monday’s game at TD Ballpark in Dunedin where he’s expected to follow starter Robbie Ray.

“We haven’t really dove into an actual gameplan,” Pearson said. “I know in 2019 I started out doing the five-two-five-two thing, but they haven’t said anything about that and I don’t think that’s going to be the case. I think they’re going to let me go out there and compete and just pitch. I’m at the big league level now so it’s all about getting that experience and going deep into games.”

All that manager Charlie Montoyo would say is that Pearson is competing for a spot in the rotation, but he seemed to rule out an early season bullpen role, which makes sense.

If Pearson proves he’s one of the best five starters this spring — that likely won’t be difficult — then starting the season in the rotation is an easy call.

Where things go after that will be the interesting part.

“Right now, we’ve got five, six, seven guys competing for a spot in the rotation and he’s one of those guys,” Montoyo said. “So we’re stretching all those guys out to start. I don’t see him coming out of the bullpen.”

Montoyo said the club will monitor the workloads of all their starters, young and old.

Going from 60 games back to 162 is going to be a challenge for every pitching staff across baseball in various ways.

“They’re all going to be just about the same, honestly,” Montoyo said of his starters. “Again, it was a weird season last year, not that many games. We’re going to work with (the pitchers) and then look at the numbers and see what they tell us and then ask questions. That’s going to be how we’re going to do it. We’re going to monitor everybody and the good thing about the technology is it’s going to let us know a lot of stuff, but also asking the guy how he feels. That goes for almost everybody this year.”

Because of the elbow issue last year, it’s hard to really judge Pearson’s work last year in such a small sample size.

He had trouble locating his secondary pitches, but the stuff was off overall and it all made sense when he went on the IL on Aug. 19.

The velocity had returned when Pearson was deemed healthy enough to be activated Sept. 24, but he pitched out of the bullpen in short stints upon his return, once again making it hard to judge.

One thing is certain, Pearson learned a ton in 2020.

“I felt like early last year I was trying to point corners too much rather than just fill up the zone with strikes,” Pearson said.

“There was a lot of times last year when I would just waste pitches, whether it would be non-competitive fastballs up or whatever, so it’s all about making those competitive misses, as well. Attack the zone and when you miss, don’t miss by a drastic amount. Let that miss serve something. If you’re going in on a guy, you want to miss in rather than missing over the plate. If anything, you miss in and you brush them off the plate, it serves a purpose. That’s the little stuff that I’ve been kind of learning as I’ve matured up here.”

His focus this winter has been to sharpen his slider and throw it in the 86-88 mph range, while also continuing to develop the curveball and changeup.

Getting ahead in the count with his four-pitch mix is also a key.

“You don’t want a kid to struggle, but by him struggling, he learned a lot,” Montoyo said. “It doesn’t matter how hard you throw in the big leagues, if you don’t get ahead, if you don’t locate your pitches you’re going to pay the price and he did a little bit, which it was good. It was a big lesson. I know he learned from that and he’s making that adjustment right now.”

At this point, Pearson is saying all the right things, knowing full well there will be a leash attached to him in some way, shape or form, a story that will start to play out in the summer months and likely won’t be for public consumption.

“I’m excited just to pitch in the big leagues this year,” Pearson said. “Whatever role that may be, whether it’s starting (as the No. 2 starter) after (Hyun-Jin) Ryu or coming in after him in a relief appearance, whatever it is, rotation or bullpen, I’m excited for whatever it is and I’m ready to compete.”​