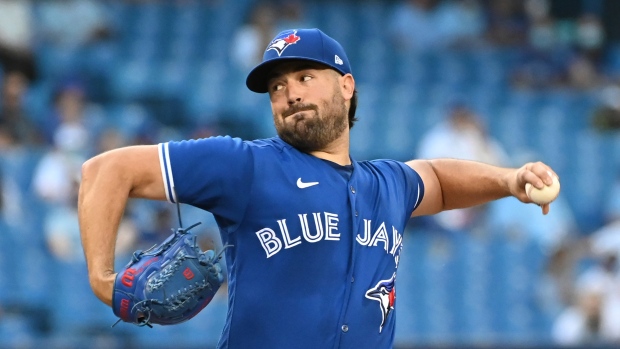 TORONTO — With the Major League Baseball off-season set to officially get underway for all 30 clubs at some point later this week, there’s no questioning the importance of and intrigue surrounding the coming weeks for the Toronto Blue Jays.

Not only do they have two premier free agents of their own in Robbie Ray and Marcus Semien, who will surely be attached to draft pick compensation once they’re issued qualifying offers in the coming days, but the bitter taste the organization was left with thanks to a disappointing outside-looking-in finish on the final day of the season has them supremely motivated to take the next step.

That’s not easy to do, especially after landing two of the biggest bargains on the market in that aforementioned duo a year ago, but there’s both the payroll resources and prospect capital needed to be a major player on both the free agent and trade fronts.

Finding a way to creatively get to 90-plus wins once again is the only goal.

As with any serious contender, it all starts with the rotation, and that makes Ray’s status the biggest question heading into the winter.

With money to spend and the payroll expected to go up — the Jays ended up spending approximately $150 million payroll-wise in 2021 when all was said and done, according to Spotrac — there’s no doubting the club’s ability to re-up Ray.

Their appetite to do so at Ray’s number, however, is another question.

If general manager Ross Atkins & Co. truly believe Ray has turned the corner for good and is worth the $20-25 million AAV that he’s likely to command on the open market, the 2022 rotation could be mostly set.

But if Ray escapes, a front-of-the-rotation starter becomes an immediate need and the likely focus.

There’s also a decision to make on free-agent starter Steven Matz, who quietly posted a sparkling 2.91 ERA in the second half of the season and suddenly looked like the lefty that the New York Mets had seen flashes of before he was shipped to the Jays last winter in another move that worked out very well for Atkins.

While it seems unlikely in the end, the Jays have internally debated handing Matz a qualifying offer to tie the 30 year old to draft pick compensation, but they would run the risk of him simply accepting the $18.4-million pact.

Even though he may be worth it, that’s a pricey number to be tied into early in the off-season for a back-of-the-rotation option, considering the other names that will be seeking less later down the road in what’s likely to be a slow-moving off-season marked by CBA negotiations.

With all these dominos in mind, here’s a look at a handful of rotation options the Jays could target in the coming weeks.

If you throw Clayton Kershaw into this mix, there are three surefire future Hall of Fame arms in this free-agent class.

The competition for Scherzer and Verlander’s services will be fierce, but it’s hard to peg what the two veteran right-handers will be seeking in free agency.

He’s getting multiple years and will be able to pick his destination.

Verlander, meanwhile, is coming off a lost season due to late 2020 Tommy John surgery, and very well could be in the market for a one-year deal unless his past resume earns him a longer pact from a pitching-starved contender.

While it seems unlikely that the Jays would be the favourites for either, don’t underestimate the allure of a young team ready to win.

This scenario becomes much more realistic if Ray walks and they’re still unsigned.

The Jays have put the full-court press on Gausman when he’s been a free agent the past two winters, so it would make sense that they’ll be interested again now that the 30 year old is coming off a career year with the San Francisco Giants.

This time, it’ll cost much more than the three-year, $40-million-ish pact the Jays offered him last November (As an aside: What a steal that would have been).

He’s essentially the righty version of Ray, with an inconsistent track record but a career-year platform season now in his back pocket.

Unlike Ray, Gausman can’t be tabled a qualifying offer, which will help his market immensely.

The easiest comparable for both Ray and Gausman is the five-year, $118-million deal that Zack Wheeler signed with the Philadelphia Phillies two years ago at the same age and with similar track record questions lingering.

The Jays really seem to want him back and believe the strides he’s made under the tutelage of pitching coach Pete Walker are sustainable.

Is he a Cy Young candidate every year? Maybe not, but Ray’s arm talent has always screamed at least No. 3 starter.

The market will likely dictate where this one goes because Ray isn’t about to give the Jays any sort of hometown discount after authoring a brilliant 2021 campaign for just $8 million.

After years of consternation surrounding giving up this talented arm way back in 2012, it would be poetic to see him return on a show-me deal the minute the Jays got back to being a true contender.

Syndergaard’s free agency is among the more intriguing situations to monitor this winter, if only because of his upside.

Limited to just two measly innings across the 2020 and 2021 seasons thanks to March 2020 Tommy John surgery, Syndergaard has as much upside as any starter on this market and he should be restriction-free heading into his age-29 campaign next spring.

It’s very likely that the New York Mets will extend the QO, and Syndergaard could simply accept just like Marcus Stroman did a year ago.

If he doesn’t, even one season from the 6-foot-6 righty might be worth the draft pick the Jays would have to give up.

Blessed with the good fortune of pitching his first seven seasons in the Mile High City, Gray managed to post some respectable numbers in his final season in Denver.

While a 4.59 ERA isn’t going to knock anyone’s socks off, the 29-year-old righty’s expected ERA sat a touch lower at a reasonable 3.95 and he accumulated 2.3 fWAR across 23 starts.

Gray reportedly turned down an extension offer from the Rockies this season and is reportedly seeking a three-year deal in the range of $10 million per season.

If someone thinks there’s a tweak to be made outside Coors Field, that’s not a crazy ask, although the Rockies may simply hand him a QO, which would be tough for Gray to turn down at a guaranteed $18.4 million.

As always, there are a number of interesting buy-low and reclamation project types that could be of interest, including Eduardo Rodriguez, Alex Cobb, Alex Wood, Drew Smyly, Dylan Bundy and, once again, Canadian lefty James Paxton.