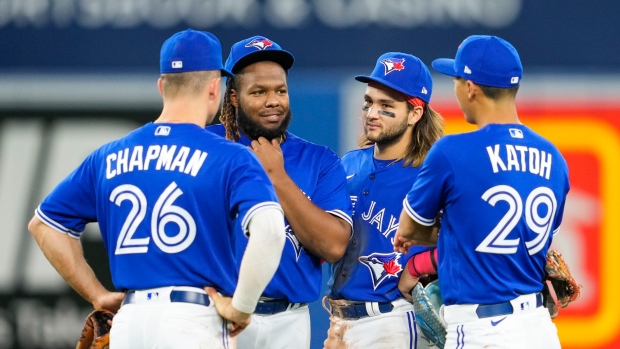 TORONTO — The Toronto Blue Jays are shifting their defenders more than any team in baseball this season and, really, it’s not even close.

After using the shift just 25 per cent of the time overall in 2021, slightly under the league average of 30.9 per cent, the Jays have employed the shift on an astronomical 70.9 per cent of at-bats through the first month of the season.

The shift is up all over baseball in 2022 — the league average is up five per cent to 36.9 per cent as the Jays and New York Yankees opened their three-game series at Rogers Centre on Monday — but it’s the way GM Ross Atkins’ club has steered more towards shifting right-handed hitters that has driven up the Jays’ shift percentage.

The Jays are shifting left-handed hitters, the norm over the last few years, 69.7 per cent of the time, which is about 12 per cent above league average.

But right-handed bats? Toronto defenders have shifted a staggering 71.5 per cent of the time against them, eclipsing the MLB average by nearly 50 per cent and well ahead of the next closest team shifting righties, the New York Mets at 59.4 per cent.

Only five teams in baseball are shifting against right-handed hitters more than a third of the time, and the Jays are well over two-thirds.

Add it all up and you see that some sort of philosophical change took place over the winter.

“I think it’s just the philosophy of ‘How can we be better?’ and then always thinking that way and making sure that before we institute a change or even become a little bit more aggressive with any type of deployment or strategy that we double, triple check it,” Atkins explained.

“We went through that process this off-season and revisited it subjectively, objectively spending a lot of time with Charlie (Montoyo), Luis Rivera, Gil Kim and then in our offices led by (assistant GM) Joe Sheehan and (director of baseball research) Sanjay Choudhury and the work of (major league coach) Adam Yudelman and (baseball research analyst) Dan Goldberg to really battle test what we were doing and see how we can improve on it, and we saw some opportunities.”

Figuring out exactly what those opportunities were or are would likely take a data science degree and full access to all the numbers that the Jays’ well-stocked research and development department has developed and tinkered with over the years.

Baseball Savant’s definition of a shift is usually a touch different from how individual teams define theirs internally, and that varies from club to club.

The above numbers from Savant take into account each time there are three defenders on either side of second base, something the Jays are doing with extreme regularity.

Oftentimes, it’s the small plays that go unnoticed that can make a shift valuable.

“Some of the more encouraging things that have happened have been with the four-man outfield,” Atkins said. “Obviously, there’s been some balls hit at us into the shift on the infield, as well. Santiago Espinal seems to have been in the right place, right time quite often. Keeping Joey Gallo to a single on a ball down the line, next pitch double play. Not even sure many people noticed the difference in how a four-man outfield (affects things). It’s not just when balls are caught, but when guys are putting balls in the air that often, what it means for keeping guys to singles is significant as well.”

What’s the goal and how does the process work?

This answer will seem simplistic, but it’s really about just putting players in the best position possible to succeed.

“I think it’s just enough information to suggest the outcomes will improve,” Atkins said when asked why the all-in approach to shifting so far this season. “It’s different for every hitter, the pitcher is a factor, the defenders are a factor. When we had enough information that suggested this would incrementally improve us, we thought it was worth deploying.”

Infield coach Luis Rivera, who’s responsible for deploying the shifts from the dugout during the game, believes it’s been working like they envisioned.

“I think we’ve been successful doing it,” Rivera said. “There have been a couple base hits to right field, of course, but other than that Santiago has been making a lot of outs right behind second base. We’ve taken a lot of hits away up the middle.

“You get a base hit the other way, it happens, and you just go, ‘Hell, what happened here?’ but it’s going to happen. If you’re going to take 10 base hits away and one or two is going to go the other way. I’ll take that any time.”

There will be a back-and-forth adjustment game. That’s baseball.

If hitters refuse to adjust, that plays right into the shift-based numbers.

If they do attempt to adjust and go the other way, it’s definitely not going to be playing into the hitter’s strengths. The Jays consider that a win in most cases.

“I don’t see teams doing anything different, but I see players trying to do different things, and it’s hard to do,” Rivera said. “If I can take that aggressiveness away from a guy who hit 20 or 30 homers and he’s going to shoot a ground ball to second base, we accomplished something. We’ve taken that aggressiveness away. If they want to try, go ahead.”

The preparation of it all is perhaps the most important part.

Once the R&D department gets the info to the coaching staff — Goldberg is mentioned as one of the key number crunchers when it comes to the shift — Rivera, Montoyo and pitching coach Pete Walker will talk about how pitchers are planning to attack hitters and exactly how they’ll shift evolves from there.

“It’s a combination,” Atkins said. “There’s a process pre-series, there’s a process pre-game, there was a process this entire off-season and into spring training, but those decisions we try to make before every series and every game so that it’s not speeding up on anyone. It’s a team of people.”

In-game, there is a feel element to something that’s obviously rooted in math and the ideal positioning spit out by a computer.

“We talk before every series and we go over where we’re going to play each guy,” bench coach John Schneider said. “We kind of combine that with how we’re going to pitch certain hitters and make sure that it lines up. From there, it’s kind of on Luis to use his feel and judgement a little bit to see if a hitter is making a conscious effort to do something different and manipulate the bat, and if they are, we adjust.”

Why shift righties so much?

With the league average percentage of shifts on right-handed batters sitting at 22.2 per cent, the Jays are outside the box with their 71.5 per cent shift rate against righties.

But with the league average up by six per cent this year, it could catch on more as the year progresses.

“I think it’s just the evolution of hitters’ swings and what they’re trying to do,” Schneider said. “Whereas 10 years ago a guy would shoot a ball to right and today they’re trying to hit it hard and in the air. If they mishit it and it’s on the ground, we want to be where the ball is going to go.

“The righties, I think, probably more teams will start to do it than not … it’s just trying to not ignore tendencies. If a right-handed hitter hits a hard ground ball to where the second baseman should be, we’ll take it. There’s always going to be the ones where it looks bad, like a broken bat or a 49-hopper over there, but it’s just being aware of tendencies and trying to take advantage of them.”

Matt Chapman, a right-handed hitter himself, can see the gameplan.

“With guys trying to hit home runs, pull the baseball, get the head out there, it kind of makes sense,” he said. “You don’t see too many opposite-field ground balls these days, most of them are pulled and the majority of balls are hit in the air anyways.”

What do the players think of all the shifting?

Ask any pitcher about the shift and you’ll get the same sort of answer that Kevin Gausman gives with a smile.

“I think the first thing you need to know is that it’s a love-hate relationship, to be honest,” Gausman said. “Sometimes, you’ll give up a hit that would’ve been right at somebody.

“Sometimes, it’s great. Sometimes, they’ll smoke a ball right back at you and you turn around and Bo Bichette’s right there and it’s like, ‘Alright, heck yeah.’ And other times, my first start here against Texas, (Nathaniel) Lowe, his first AB, little chopper ground ball that would’ve at Bo, and it was a hit.”

Pitchers have to stay true to themselves, which is why the above process of figuring out the pitcher’s plan of attack before deciding how to shift is key for Walker and Rivera.

“That’s where it’s really about how good of a hitter are they,” Gausman said. “Do they have good enough bat control to pull their hands in and hit it to right? Whereas some guys are not going to change their swing. That’s the question. Do you pitch to the shift, or do you pitch to hitters’ weaknesses?

For the defenders, there were some questions asked in spring training, too.

“I think at first they were kind of like, ‘Yo, this is a lot,’” Schneider recalled. “It’s cool, too, because the players have input and we don’t always agree, which is great. Healthy conversation is good. But I think they understand, in a very small sample size, that it’s working and, again, it’s not just something we said, ‘Hey, let’s try this.’ We dug pretty deep into the why.”

The answers that were given to Chapman when he was traded over from Oakland were enough to convince the veteran third baseman.

“I think the why, they communicated that it’s not coming out of nowhere,” Chapman said. “They want to put us in the best position to get outs and I’m so used to shifting now I don’t even realize we’re doing it or using it as much as we are.

“Everything we do in this organization is to try to win baseball games. Whatever they want to do, I’m on board with, and I know it’s something as the season progresses and as we see guys more often, we can adjust accordingly.”

Atkins said it’s a process that’s always being evaluated to make sure the data is lining up with what the players are seeing.

“We’re not the ones picking up ground balls and we’re not the pitcher having to watch balls go into the four-hole, so we present information and ask where we can get more feedback or where they want clarity or have questions,” Atkins said.

The Jays’ shiftiness may be stomped out a year from now, but it’s still far from certain how things will look as baseball tries to limit shifting, or even ban it altogether.

Atkins and his club will deal with that when the time comes. As of today, the shift is a tool to use towards success.

“That’s a whole other discussion,” Atkins said. “The way I think about evolution and change is we have to be open-minded regardless of our individual stances.

“We’ll play the game the way the rules are in place.”

Gausman is one player who will be happy to see the shift go.

“I think it’s really good for the game of baseball to get rid of the shift or to change the rules of the shift,” he said. “I think it’ll make for more complete baseball players.”