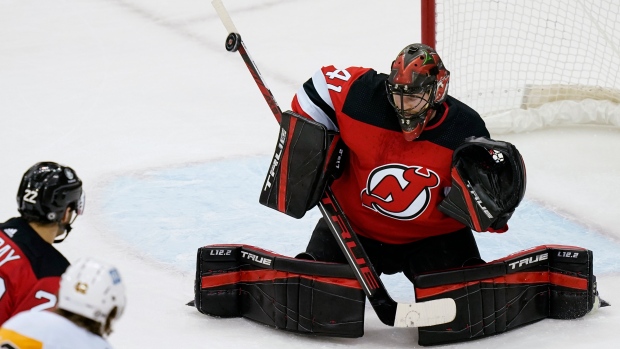 NEWARK, N.J. — Scott Wedgewood made 40 saves, Jack Hughes had a goal and an assist, and the New Jersey Devils beat the Pittsburgh Penguins 3-2 on Thursday night.

P.K. Subban and Travis Zajac also scored, and the Devils collected their second straight win at home following a losing streak of 11 games (0-10-1) in Newark.

Mackenzie Blackwood was expected to start in goal for New Jersey, but he was scratched after warmups. The team says the absence was not COVID-19 related.

“I thought our guys did a great job,” Devils coach Lindy Ruff said. “Obviously, we faced some adversity and lost a couple of key players, we got a big effort out of a lot of guys that allowed us to win the game and get off to a great start.”

The Penguins and Devils are back at the Prudential Center on Saturday for the second of three straight games against each other.

Subban got his third goal of the season with a blistering slap shot at 8:42 of the second period to give the Devils a 2-0 lead. The charismatic defenceman extended his point streak to three games. Hughes and Jesper Bratt assisted on the power-play tally.

“That’s a high-powered team and skilled team, that was one of our best efforts,” Wedgewood said. “The guys did a great job, it was fun to watch. Obviously in the third period, they did it to a 'T.' It’s a big win for us against a high-skilled team and that’s something we need to look at, learn from and understand that’s how you are going to win in this league."

Guentzel spoiled Wedgewood’s shutout bid in the final minute of the second period with a redirection in front on the man advantage. Prior to the power-play goal, the Devils successfully killed off 16 straight penalties over the past five games. Kris Letang and Kasperi Kapanen assisted on the play.

“We didn’t really like too much of the first,” Guentzel said. “We pushed in the second and third but sometimes you can’t spot them that many goals. Good thing about the schedule, we get them Saturday and Sunday, so we got to be ready next time.”

Pittsburgh outshot New Jersey 22 to 13 in the second period.

Hughes opened the scoring with a sharp-angled, top-shelf snipe at 10:02 of the first period. The 19-year-old notched his seventh goal of the season, matching his total from his rookie year. Ty Smith and Kyle Palmieri assisted on the play.

“I just saw a little bit of room up top and tried to bank it off his head and put in the back in that net,” Hughes said. “I don’t know if it did hit his head, but it was a good shot and I’m happy it went in.”

Rust pulled the Penguins within one at 19:55 of the third period.

Penguins alternate captain Evgeni Malkin did not make the trip to New Jersey after sustaining an injury late in the first period against the Boston Bruins on Tuesday.

“We are looking for a collective effort,” Sullivan added. “We have to be hard to play against, we got to rely on our team structure."

Devils rookies have combined for 49 points this season, most in the NHL. Six different players (Ty Smith, Janne Kuokkanen, Yegor Sharangovich, Nathan Bastian, Mikhail Maltsev and Nicholas Merkley) have contributed to that total.

Pittsburgh faced former assistant coach Mark Recchi for the first time since his off-season departure for New Jersey. Recchi spent the previous six seasons with the Penguins organization, and the franchise won two Stanley Cups during that stretch.

Casey DeSmith and Jarry have combined to allow 14 goals over Pittsburgh’s last eight games, which included a six-game winning streak that ended Tuesday after the Penguins lost to the Boston Bruins, 2-1.