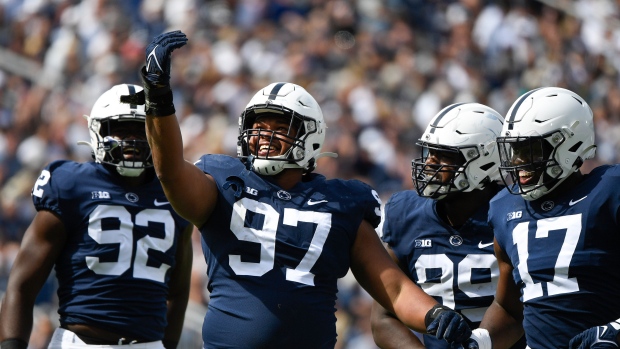 STATE COLLEGE, Pa. (AP) — Sean Clifford passed for four touchdowns and a career-high 401 yards, leading No. 6 Penn State to a 38-17 victory over Villanova on Saturday.

Clifford completed 19 of 26 passes, finding Parker Washington for two TDs and Jahan Dotson and KeAndre Lambert-Smith for one apiece. Tyler Warren rushed for a touchdown and Jordan Stout kicked a field goal for the Nittany Lions (4-0), who led 17-3 at the break in their eighth straight win.

A week after outlasting Southeastern Conference foe No. 23 Auburn in a back-and-forth slugfest, Penn State showcased its speed against its in-state FCS opponent.

Early in the second, the Wildcats pressured Clifford and brought him down at midfield for their first of three sacks on the afternoon. But the fifth-year senior popped up and fired to Washington crossing over the middle on the next play. Washington sliced through Villanova’s secondary for a 52-yard score that made it 14-3.

Stout added a 29-yard field goal before halftime, but Penn State missed out on an opportunity for an even bigger lead.

Cornerback Johnny Dixon dropped what could have been a Pick-6 midway through the first half, and the Nittany Lions’ final two possessions were spoiled by a holding penalty and a sack.

Clifford continued to hook up with his receivers for big plays in the second half.

Lambert-Smith caught a quick pass and beat the Wildcats for an 82-yard score on the second play of the third quarter. Later in the third, Washington found a hole in coverage and Clifford found him for a 23-yard touchdown pass and 31-3 lead.

Warren added a 3-yard touchdown run off a direct snap in the fourth quarter.

Villanova tight end Tyler Will suffered a concussion and was taken to a hospital after he made a tackle on the second-half kickoff.

Will was down motionless for about five minutes before he was loaded onto a backboard and carted off, slightly moving his hands.

Villanova staff reported that Will was receiving treatment for a concussion, but was alert and had full movement in his extremities.

Villanova: The Wildcats should go into their bye week with their heads high. While their offense wasn’t able to hang with their more talented counterparts, the defense played tough and forced a Penn State offense fresh off its best game into multiple mistakes that kept the score respectable early.

Penn State: The Nittany Lions might have had a cleaner outing had they just taken what Villanova was giving them. Clifford had his first and second reads open often, but he seemed to be in go-for-broke mode much of the first half. That kind of play could cost Penn State against stiffer competition, especially if the running game doesn’t get going.