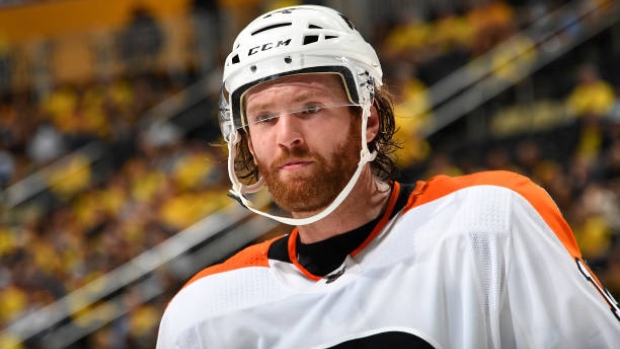 While most of the hockey world focused on 10 days of frenetic play-in round hockey, the league’s eight best teams were jockeying for position during round-robin play. The Philadelphia Flyers (East) and the Vegas Golden Knights (West) both swept the competition, securing the top seed in their respective conferences.

Vegas securing the West is not surprising. This has been one of the league’s best teams over the past three years, even amidst some shaky goaltending over the course of the 2019-20 regular season. Philadelphia certainly raised some eyebrows, but that has less to do with the team itself and more to do with how comfortable they were in dispatching three high-quality teams (Boston, Tampa Bay, and Washington) that vied for the Presidents’ Trophy all season long.

One of the more interesting aspects of the success of these two teams – especially after watching superstars like Connor McDavid, Sidney Crosby, Evgeni Malkin, Leon Draisaitl and Auston Matthews dispatched in the opening round – is that they are led by a pair of the best two-way forwards you can find in the league. In Philadelphia, it’s centre Sean Couturier. In Vegas there’s right wing Mark Stone.

Both players have had fascinating careers. Couturier was a high draft pick – a former eighth-overall selection in the 2011 NHL Draft – but he struggled to generate meaningful offence earlier in his career, pushed into a heavy defensive role with limited teammate quality.
Stone travelled a completely different path. He was a sixth-round pick in the 2010 draft who worked for years to improve a skating limitation teams thought might impact his overall game.

The one thing they have in common is that their teams throttle the competition when they are on the ice. In many ways they feel like the new guard of players where there is complete intersection and consensus between the scouting and analytics crowds. This group has historically included names like Pavel Datsyuk, Patrice Bergeron and Ryan O’Reilly. 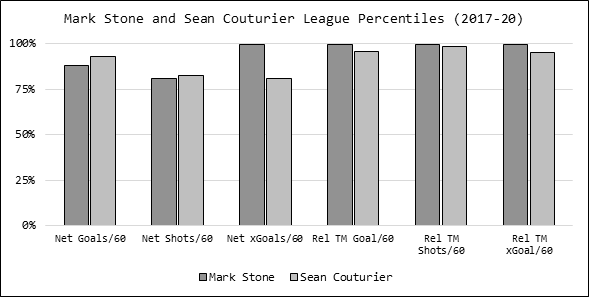 What does this indicate? Well, a few things. The on-ice measures tell us that they are integral players to overall team success. The team relative measures tell us that these players are capable of elevating the play of whichever forwards are lucky enough to play with them. Their teammates see huge surges in performance when playing on a line anchored by Stone or Couturier; when they move away, their numbers tend to plummet. Most importantly, we see that the data affirms they are much more impactful players than just about anyone else on an active roster.

A second way to show their sheer dominance is to illustrate what has happened for Philadelphia and Vegas (Ottawa previously) with these players in stow. Let’s look at the on-ice/off-ice splits for a moment over that same three-year horizon:

The interesting thing about both players is that they saw their circumstances dramatically change over the course of the past three seasons. Whereas both players were stuck on teams devoid of depth and talent (particularly in 2017-18) at the beginning of this window, their fortunes improved.

When Stone was traded to Vegas at the 2019 deadline, he brought his two-way excellence to a team that already had it in spades, and you can see why the Golden Knights have been able to put a bit of a stranglehold on the rest of the Pacific Division. For Couturier, it coincided with a permanent move to centre and displacing teammate Claude Giroux to the wings. That, and ample player development around him.

The broader argument here concerns the sheer benefit of being such a polished player on both ends of the ice. You can be the most electric offensive weapon in the league. You can be a shutdown forward cut from the same cloth as Guy Carbonneau. But if you are trading off goals in other areas of the game, your overall effectiveness is diminished.

Players like Couturier and Stone may not be the flashiest forwards in the game, but they are two of the most dominant. They are also, respectively, the biggest individual reasons for their team’s success right now.