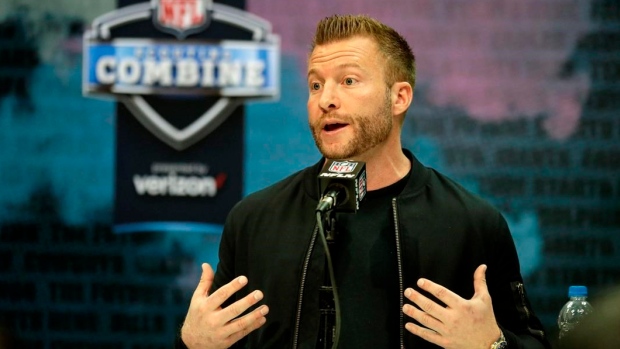 Los Angeles Rams coach Sean McVay is beginning this unusual NFL off-season with big plans. The millennial coach is always on the lookout for teaching innovations, and he meticulously planned out the next nine weeks by examining everything from the ideal length of virtual meetings to the best at-home workouts.

And then McVay accidentally failed to turn on the audio component when the Rams began their initial team meeting Monday morning, leading to several minutes of fumbling for the coach and laughs for his players.

“I provided some good comic relief for guys,” McVay said. “I was feeling myself a little too much on this IT, and I got a little dose of humble pie.”

Once the players could hear him, McVay got to work in this unique spring.

The Rams will hold four 90-minute virtual sessions of teaching per week, learning their new assignments and schemes on computers and tablets instead of the grass. McVay will spice up the sessions with guest speakers, including Clippers coach Doc Rivers and hopefully Dodgers manager Dave Roberts.

“This will enable us to really create a good foundational understanding of how we want to operate offensively and defensively,” McVay said. “More than anything, it's just being able to connect and see the guys' faces. Today was a good start.”

McVay has plotted out the rough lengths of each session to maximize involvement and minimize boredom.

“They say 12 minutes is that ideal timespan,” McVay said “We don’t want to have (a) meeting block go more than 12 or 20 minutes at a time. Making sure that it’s a mix of film, but also conversation. Splicing in some TV clips is a good way, as long as they say nice things about the players on the commentary.”

The Rams will use their Thursday sessions to talk about situational teaching. Later in the spring, they'll set aside specific days for special teams teaching.

“We’ve got a plan, but I’m sure we’ll adjust and adapt accordingly based on the players’ feedback,” McVay said.

Although the Rams finished 9-7 last year for their third straight winning season under McVay, they have plenty of work to do during the off-season. Along with several major roster changes, McVay hired a new offensive co-ordinator, defensive co-ordinator and special teams co-ordinator.

McVay's basic offence will remain largely the same, and the Rams are expected to keep running a 3-4 defensive front after using it for three years under Wade Phillips. But the details will change, and McVay wants his players up to speed for the opening of training camp — whenever that might happen.

“It’s just going to be a little tough with some guys that are more active learners, that need to be on the field to learn it,” receiver Josh Reynolds said. “But I think ultimately it gives guys a new way to be able to study and learn different things. I think it’s a plus and a minus.”

The Rams are also completing planned workouts at home, doing their best to get into ideal shape with limited resources. While veteran left tackle Andrew Whitworth built an entire weight room in his garage immediately after figuring out his usual off-season program would be disrupted, younger players like Reynolds are putting together their own plans with more limited resources.

“I did order some weights, so I'm able to actually, physically work out,” said Reynolds, a speedy wideout who's likely to get a larger role in McVay's offence this fall with the departure of Brandin Cooks. “The running aspect, it's harder in California right now because they've shut down fields, so I've been looking into getting my own conditioning. ... I've been looking into a Peloton bike. I've been hearing those are really good.”