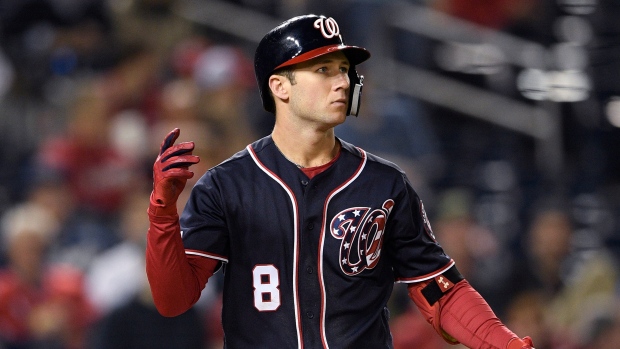 Manager Dave Martinez said before the Nationals’ Friday night game at Milwaukee that Kieboom will have the surgery on May 27. Kieboom, who went on the injured list before the season, has been dealing with a strained flexor mass and sprained ulnar collateral ligament in his throwing elbow.

Kieboom, 24, batted .207 with a .301 on-base percentage, six homers and 20 RBIs in 62 games last season. He played third base last season but also has experience at shortstop.

Martinez had more encouraging updates for other injured players.

He said Stephen Strasburg and Joe Ross each threw 43 pitches and three innings in a simulated game Thursday in Florida.

“They came out of it feeling good,” Martinez said.

Both pitchers have side sessions Saturday and will next throw four innings and 60 pitches. Martinez said the Nationals could send both out for minor-league rehabilitation assignments as the right-handers prepare to make their 2022 debuts.

Strasburg is recovering from thoracic outlet syndrome surgery and has pitched a total of 26 2/3 innings since the start of the 2020 season. Ross hasn’t pitched in a major-league game since Aug. 10 due to a partially torn elbow ligament.

“They worked really hard to get back, both of them did,” Martinez said. “I’m very proud of what they’ve done. It’s tough. It’s tough when you have those injuries and you’re in Florida, but the end is coming. Hopefully both of them will be here sometime in the near future.”