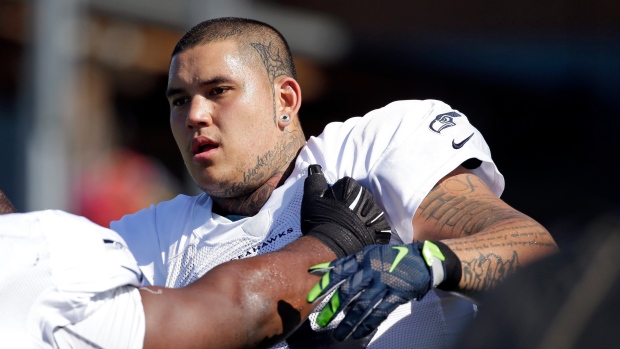 RENTON, Wash. - Less than three months after a cancerous kidney was removed, Seattle Seahawks defensive tackle Jesse Williams was back on the practice field Thursday as more than a spectator.

Back in pads. Back being a football player.

"Feels good, running around, moving around with the team," Williams said. "Today was the day I was pretty much kept in my mind the whole time that I had been in the hospital, the first day back, so it was driving me. It was a big deal to get out there today."

Williams was activated from the non-football injury list and took part in his first practice of the season after being diagnosed with papillary type 2 cancer in May and undergoing surgery. His time on the field Thursday was mostly limited to individual drills, but it was a significant step after Williams' football career was in jeopardy when the diagnosis was made.

"I try not to deviate my mind from the goals and the plans that I set already," Williams said. "The team believed in me and gave me a chance. I had a pretty rough start already. Hopefully getting rid of the bad kidney got rid of a bit of the bad luck I had as well. I'm looking forward to progressing and staying out there the best that I can."

Williams has been riddled with injuries since being a fifth-round draft pick out of Alabama in 2013. Williams spent his first two seasons on injured reserve with major knee injuries, but those seemed minor compared to receiving a cancer diagnosis.

According to statistics from the American Cancer Society, the average age of people diagnosed with kidney cancer is 64, and kidney cancer for those under age 45 is rare. Williams is 24. Williams said the trigger for getting checked out by doctors was having blood in his urine.

That led to additional tests and eventually the diagnosis.

"I was actually out with my family when I got the call, and it's not a nice call to get when you're just hanging out," Williams said. "Took 24 hours to figure it out, did what I needed to do and got to work the next day and hit the ground running."

To protect his kidney, Williams will wear a special pad, although he said it's an area where he rarely gets hit.

"One kidney, no kidney I'm trying to find a way to get back out there," Williams said.