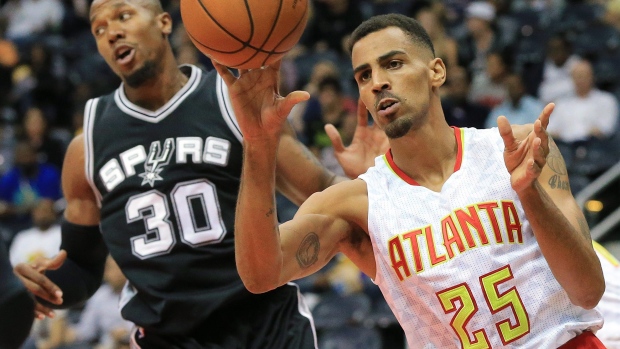 ATLANTA - After a win in court, Thabo Sefolosha was back on the court for the Atlanta Hawks.

Sefolosha played his first game since an April encounter with New York City police left him with a broken right leg. He scored five points in eight minutes of a 100-86 preseason victory over the San Antonio Spurs on Wednesday night.

"It felt good," Sefolosha said. "I didn't play heavy minutes. At the same time, it was good to get a feel for it, just to be out there."

The 6-foot-7 forward missed Atlanta's first two preseason games while standing trial on the charges resulting from the incident with police, which occurred last season outside a trendy Manhattan nightclub during the final week before the playoffs.

Sefolosha turned down a lenient plea deal and was acquitted of all charges last week.

"I wanted to show that I didn't do anything wrong," he said. "I wanted to prove that for my family and myself and all the basketball fans. It's a good feeling, but I'm ready to put it behind me. I'm glad it worked out. Justice was served."

Sefolosha is eager to focus on basketball again after missing the Hawks' run to the Eastern Conference final. He hopes to win a starting job at small forward, the position manned last season by DeMarre Carroll. He left over the summer as a free agent to sign with Toronto.

Kent Bazemore has started the first three preseason games for Atlanta. Now that Sefolosha is back, the competition figures to get interesting over the rest of the preseason, though he conceded there is still work to be done before it's a fair fight.

"I'm making progress every day," Sefolosha said. "Hopefully I will be back to 100 per cent soon, but I don't have a timeline."

Coach Mike Budenholzer liked what he saw in Sefolosha's brief appearances. He will be brought along slowly, with an eye toward avoiding any setbacks.

"That was the Thabo we're used to seeing," Budenholzer said. "It's going to take some time to work back into playing shape, just to make sure he feels comfortable and confident. But he looked great playing in this type of game. Hopefully he keeps building on it."

Less than an hour before tipoff, Sefolosha was getting in some extra shooting on the practice court. When he entered the game, he was greeted with chants of "Thabo! Thabo! Thabo!" from the crowd at Philips Arena.

A full recovery is his top priority.

"Whether I'm starting or not," Sefolosha said, "the best was I can help the team is being healthy."