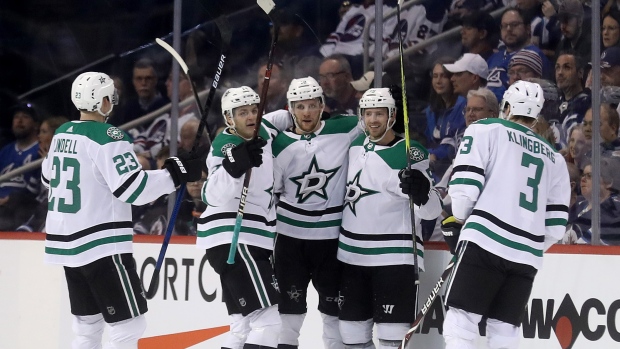 WINNIPEG — The results may show the Dallas Stars have figured out the Winnipeg Jets this season, but Stars forward Radek Faksa isn't buying it.

Faksa and Tyler Seguin each scored twice and Esa Lindell had a goal as Dallas defeated the Jets 5-2 Monday to end a two-game losing skid.

The Stars, who won the season series with the Jets 3-1, hold the first wild card in the Western Conference (39-31-6) and might meet the Jets in the first round. Winnipeg (45-27-4) sits in first place in the Central Division, two points up on Nashville with a game in hand.

"It'll be tough for sure," Faksa said of a possible post-season meeting. "Winnipeg is one of the best teams in the league, and I would say playoffs is a way different season than a regular season so it'll be way different games than in the regular season."

Alexander Radulov contributed a pair of assists and Ben Bishop stopped 21 shots for Dallas to record the 200th win of his career.

Kyle Connor had a goal and one assist and Patrik Laine ended a 12-game scoring drought for the Jets with his 30th of the season. Connor Hellebuyck made 32 saves.

"I don't think it was good. That's the way we can't play," Laine said. "I think we were just assuming that the game is gonna come to us but it doesn't work that way.

"We gotta work hard for every single chance and not give them anything. Yeah, that wasn't a very good game from us."

"Tonight (the Stars) played with desperation," Connor said. "They're fighting for their lives for a playoff spot and tonight we didn't match that."

The Stars got their first power play of the game early in the second and couldn't capitalize on five shots, but a minute after it expired they hit their stride.

Lindell's shot from the top of the circle went by Hellebuyck's blocker at 10:27, although it appeared it might have been tipped by Faksa.

Faksa then went in alone on Hellebuyck and beat the netminder high on his glove side at 12:23.

The Stars had a two-man advantage and Seguin notched his 30th goal of the season with a shot on the blocker side at 15:16. Seguin has scored 30 or more goals in five of his last six seasons.

Seguin tallied his second goal on the power play at 10:34, adding to a four-game point streak that includes four goals and four assists.

"We've been playing well lately, you know we just haven't gotten the results," Bishop said. "It's nice to get the result tonight."

Winnipeg responded with a burst of life 29 seconds later as Connor notched his 33rd goal of the season, which followed up the hat trick and one assist he had in Winnipeg's 5-0 victory over the Predators last Saturday.

"We didn't have anywhere near the hop or jump we had the other night and couldn't find it," Jets head coach Paul Maurice said.

Laine blasted a one-timer past Bishop at 15:10 to close the gap 4-2, but Faksa put the puck into an empty net with 40 seconds remaining.

Winnipeg plays the third game of its four-game homestand Thursday against the New York Islanders. Dallas goes to Calgary Wednesday to play the second contest of a four-game road trip.

Note to readers: This is a corrected story. A previous version misspelled Radek Faksa's last name