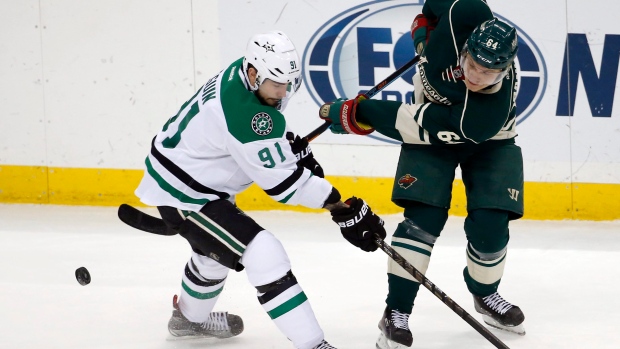 ST. PAUL, Minn. - Coach Lindy Ruff wanted his Dallas Stars to score one goal in the first 5 minutes of the third period on Saturday night.

Tyler Seguin scored with just over a minute remaining in overtime and the Dallas Stars came back from a three-goal deficit to beat the Minnesota Wild 4-3.

Alex Goligoski scored 4:57 into the third before Jamie Benn and John Klingberg also scored to erase a 3-0 lead. Antti Niemi made 23 saves and the Stars won for the fifth time in six games.

"This year we've been able to stay a lot more patient," Seguin said. "It's a message that really speaks loudly. Even going to the third period, we know how we can play, we know how much power we have in this locker room, not only up front but on the back end."

Darcy Kuemper made 40 saves and Minnesota lost its third in a row at home and fifth in six games overall.

With both teams playing the second game of a back-to-back situation, Dallas had the staying power.

Minnesota led 3-0 in the second after Jason Pominville scored his first regular-season goal since April 9 of last season, snapping a goalless streak of 22 games.

But the Stars, who beat Vancouver in overtime at home a night earlier, outshot the Wild 35-15 in the second and third periods. Benn's league-leading 18th goal came short-handed.

"I thought we had a few guys that didn't have a lot of energy, so I basically just tried to go with the guys I thought was going best and got down to three lines," Ruff said. "We got a little bit more aggressive in our play in the offensive zone, got our defence involved a lot more. I thought we played a heck of a 40 minutes."

In overtime, Seguin's found a loose puck in front and roofed a shot past Kuemper for his 13th goal of the season after Benn created a flurry in front. Dallas is 4-0 in overtime games this season with the league's new 3-on-3 rules.

The Wild lost 3-1 in a matinee against Winnipeg on Friday, prompting coach Mike Yeo to scold his team for its inconsistent effort. After taking control early against Dallas and letting a three-goal lead slip away, Yeo was just as blunt on Saturday.

NOTES: Minnesota switched defencemen on Saturday by sending Christian Folin to Iowa of the AHL and recalling rooking Gustav Olofsson. Olofsson played his second career game Saturday, skating 7:42. Olofsson and Kurtis Gabriel were re-assigned to Iowa after the game. ... F Justin Fontaine returned to the lineup for Minnesota for the first time since Oct. 30. He missed 11 games with a sprained MCL in his knee. ... Dallas entered the game with the Western Conference's leading power play at 26.9 per cent. The Wild had the league's worst home penalty kill. The Stars were 0 of 2 on the power play. ... Minnesota goaltender Devan Dubnyk had started 13 straight games.