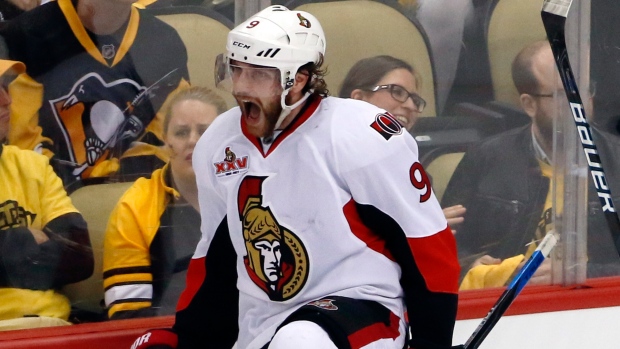 PITTSBURGH — When the clock hits zero in regulation, the Ottawa Senators go to work.

The Senators improved to 6-1 in the Stanley Cup playoffs in overtime when Bobby Ryan cashed in five minutes into the extra session on Saturday night. Put another way, the Sens are inching toward halfway to Lord Stanley based on overtime play alone.

Part of the playoffs is about being comfortable in uncomfortable situations, and the Senators have somehow managed to play like it’s any other period. All but one of Ottawa's nine wins these playoffs have been by one goal, and that one was by virtue of an empty-netter to clinch a second-round series win over the Rangers.

Zack Smith said Sunday that Ottawa has gained momentum since winning their first overtime game of the postseason in Game 2 against Boston.

They’ve rolled since then, channeling the 1993 Montreal Canadiens, who won a still-standing NHL record 10 consecutive games in overtime (10-1), on their way to Canada’s last Stanley Cup.

“We've kind of had that feeling from the start, I think, that we have nothing to lose,” Smith said. “Don't go out there being afraid to make mistakes. That is something we have learned throughout the season. It's nice to go out there, and everyone knows they just need one chance to score.”

For Ottawa, the story has been that it’s been just about a different player every night.

The common thread is that defenceman Erik Karlsson has been on the ice for all nine game-winning goals for Ottawa, generating the goal or assist in six of them.

In 1993, the Canadiens received an overtime boost from seven different players, with multiple goals from Guy Charbonneau, Kirk Muller and John LeClair – but contributions also from the expected in players such as Stephan Lebeau.

The Sens had plenty of practice in overtime during the regular season. Nearly a quarter of their schedule (20 games) went past regulation, including seven of their final 17 games. They compiled a 10-10 mark in overtime and shootouts during the season.

“I don’t know what it is,” defenceman Cody Ceci said, trying to explain Ottawa’s overtime magic. “I don't think there's anything in particular. It's just the way things are going. We've been sticking to our system right through overtime.”

That is what head coach Guy Boucher is seeing. Boucher said he doesn’t think the Sens’ attitude changes when it gets to crunch time, noting they don’t try to do “extraordinary things” but they just do “the ordinary things well.”

Overtime has been one more rallying cry for a team full of them this season, from the passing of Ryan’s mother last July, to Craig Anderson’s wife Nicholle battling cancer, to MacArthur’s stirring return to the lineup in March after multiple concussions.

That mental fortitude and mojo has been on display for all to see in overtime.

“Like I always say, the intangibles matter more than anything else,” Boucher said. “And we've had a lot of those in the course of the year and a lot of positive stuff, a lot of really positive stuff that helped us grow up to now.”