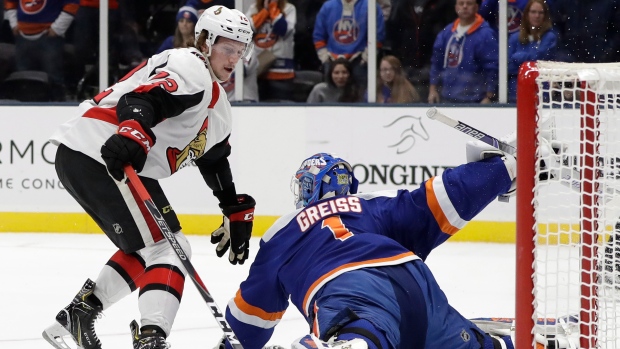 Last February, in the middle of an Ottawa Senators game in Toronto, Eugene Melnyk released a statement that boldly outlined his vision to rebuild his team into a Stanley Cup contender.

“The Senators will be all-in again for a five-year run of unparalleled success, where the team will plan to spend close to the NHL’s salary cap every year from 2021 to 2025.” the statement read.

The plan was met with a collective eye roll from Senators fans, who were tired of watching star players walk out the door. Sens fans had morphed into modern-day Montreal Expos fans, essentially rooting for a club that collected elite, superstar players – only to watch them depart when it came time to pay them in the proper stratosphere.

So when Melnyk promised to retain star players in the future, there wasn’t a single Senators fan – outside of Twitter’s infamous Jack Maxwell – who believed his words carried any substantial credibility. In Ottawa, words from ownership and management have often rung hollow, as the actions have spoken significantly louder.

But that long-standing narrative was quickly flipped upside down Thursday as the club announced the long-term extension that will keep emerging young defenceman Thomas Chabot in Ottawa through the 2027-28 season. For once, Senators fans were pleasantly surprised with a press release issued by the club.

Many Senators fans have been vacillating on whether or not to embrace the current rebuild, but the enthusiastic endorsement from Chabot could push many of them back onto the club’s bandwagon.

“When a team says they want to rebuild and you’re a big part of it, you’re just lucky to have that,” said Chabot. “It’s a big chance for you as a hockey player. This is where I want to be. I love the city and I love the fans here.”

For a fragile fan base that has been conditioned to expect the worst outcome with star players, general manager Pierre Dorion not only hit a home run on Thursday – he hit a grand slam. Locking up Chabot to the largest contract in franchise history – both in terms of length (eight years) and dollar amount ($64 million) – is the single greatest thing to try and re-establish consumer confidence in this market.

Senators fans have been ridiculed as the laughingstock of the NHL over the past 18 months, so Thursday’s development was as savoury as a playoff win. For the first time since the Senators reached the Eastern Conference Final in 2017, there appears to be legitimate optimism surrounding the hockey club.

“For us, we’ve had a plan. We knew there would be some tough days, but we’re looking forward to the great days. And getting Thomas under contract is part of our long-term plan,” explained Dorion. “We definitely feel like we’re headed in the right direction. Having Thomas play for probably the nine of the prime years of his career for the Ottawa Senators is a great thing for our fans.”

Dorion has been able to lock down two key pieces to his rebuild in the past few weeks, also inking Colin White to a six-year contract extension worth $28.75 million on Aug. 21.

“We always talk about the young core group of guys here. To see Colin sign a six-year deal, it shows that guys want to be here and be a part of it,” said Chabot.

Dorion indicated that he had initial talks with Chabot’s agents – including Ian Pulver – in early July. The two sides went back and forth with different scenarios, but it seemed as though both had an appetite for a long-term deal rather than a bridge one.

“We knew we could find a solution,” Dorion says, characterizing the talks as positive throughout the three-month process.

The fear in Ottawa was that Chabot would become a restricted free agent next summer and be lured by a lucrative offer sheet – perhaps one front-loaded with signing bonus money – the club would be unable to match. But rather than travel down the road of other RFAs such as Matthew Tkachuk, Brayden Point and Mikko Rantanen, Chabot felt more comfortable signing a long-term extension that avoids a prolonged and nasty contract negotiation.

“The way I see it, everybody is in different situations,” explained Chabot. “To be honest with you, it’s not necessarily anything I really thought about. At the end of the day, everything with my contract I left up to my agents.”

After Chabot was scratched from Wednesday’s preseason game with an illness, he sat with Dorion and his agent and hammered home the final pieces of the contract. They came to a verbal agreement on the terms right around 11:40 p.m. ET on Wednesday evening.

“I called my parents. They were sleeping, but I knew they wanted me to call them for sure as soon as I knew,” Chabot said with a laugh. “If it wasn’t for my parents, ruining their entire weekends their whole life just to bring me to the hockey rink, I wouldn’t be here. I owe everything to them.”

As Dorion concluded his opening statement to the media on Thursday, he added one final line to illustrate the significance of the Senators signing Chabot to a long-term contract extension.

Whereas nobody believed Dorion when he boldly proclaimed that trading Mark Stone was “his best day as general manager” at the trade deadline in February, even the most hardened Senators fan would have to admit the general manager’s words carried a significant amount of truth on Thursday.