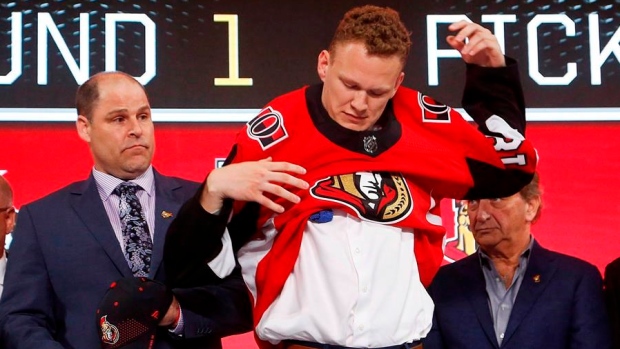 Inside a boardroom at Canadian Tire Centre on Wednesday morning, Ottawa Senators general manager Pierre Dorion showed select members of the media his projected lineup for the upcoming season.

Eyes inside the room quickly scanned for the position of the top, right-shot defenceman on the roster. And sure enough, Erik Karlsson’s name was right there for everyone to see — penciled in for opening night.

When pressed to divulge more information about Karlsson’s status — and if there had been any concrete trade or contract negotiations — Dorion politely declined to elaborate.

“When it comes to contract negotiations, we don’t believe you can negotiate in the media,” Dorion said.

The general manager emphasized that he was willing to start the season with Karlsson in the fold and didn’t appear too worried about any potential distractions that may come as a result of his presence.

“We are prepared for every scenario,” Dorion said, leaving the door open for multiple scenarios to play out.

For his part, Karlsson declined to speak to the media at the club’s annual charity golf tournament on Wednesday, but he is expected to address reporters when training camp opens on Thursday.

The meeting — which had been scheduled well in advance — was to allow the club an opportunity to discuss their rebuilding plan with key stakeholders in the marketplace.

The first step in the process was the club releasing a video late Monday night, featuring Melnyk in a conversation with defenceman Mark Borowiecki. That video has been widely panned by critics in the past 48 hours, who dismissed it as an awkward attempt to reveal a rebuilding plan.

Ruszkowski acknowledged that the reception from the video had not been overly warm, but firmly said that was merely a “first step” in trying to change the narrative around the team.

The organization did try and clear up one misconception from Monday’s video, involving Melnyk’s suggestion that 10 new players would be on the roster for opening night of this season.

The club says that comparing those two rosters side-by-side is how Melnyk came up with the number of 10 fresh faces for the 2018-19 campaign.

In the 90-minute session Dorion repeatedly used the word rebuild and suggested all his decisions would be based on the long-term health and stability of the franchise. They would no longer be in the market for quick-fix, stop-gap solutions that have landed them in trouble in the past.

Dorion alluded to the fact that he did not own his own first-round pick for next season because of the Matt Duchene trade with Colorado. When asked if he would be motivated to finish high in the standings in order to worsen the Avalanche’s draft standing, Dorion said that would not be the case.

“That ship has sailed on the first rounder,” Dorion said. “Every move we make is geared towards the rebuild.”

Dorion said the club’s new philosophy in the rebuild will be predicated on a couple of key pillars.

“We will rebuild by trading for younger, faster, stronger players who commit to our team-first philosophy, play with discipline and earn the freedom to take risks that help the team,” said Dorion.

As part of the presentation, Dorion showed a slide that indicated the club’s average age by the 2020-21 season would be 25 years old. By comparison, last year’s opening night roster had an average age of 29.

The general manager alluded to the broken dressing room from last season and said that there is “no question” those issues have been resolved to his satisfaction. He believes that the chemistry inside the locker room will be better this season, which should lead to improved results on the ice.

The general manager also said that analytics will play a role in their decision-making. “We will embrace the power of data and insights to measure our impact.”

Dorion — who has been working without an assistant general manager since Randy Lee stepped down last month — said he should be ready to announce Lee’s replacement in that role within the next few days.

Dorion also indicated the team needs to play with a defence-first philosophy — something that cost the team dearly last season. He added that head coach Guy Boucher would be changing his tactics on things like the power play and forechecking.

In particular, Dorion said, the club would move away from a passive approach and deploy an “unrelenting” forecheck.

Based on how things are going to shake out to start training camp, it appears as though Jean-Gabriel Pageau has an inside track on the second-line centre position. As it stands now, Pageau is set to be flanked by Mark Stone on the right side and an educated guess would put rookie Brady Tkachuk on the left.

Dorion was gushing about Tkachuk’s ability and believes he may be ready for NHL games right away.

At this point, Duchene heads into the season as the club’s number-one centre. Ryan Dzingel — who tied for the team lead in goals last season — is pencilled in as the left winger, while the right spot is up for grabs.

Dorion didn’t rule out Colin White — who he said Boucher was pushing for all last season — to be the opening-night right winger. Rookie Drake Batherson is also said to have a shot there.

The only line that appears to be fully formed at this point is the club’s third unit. At the present time, it features Zack Smith back in his role as a centre, with Bobby Ryan on his left side and newcomer Mikkel Boedker on the right.

Max McCormick and Tom Pyatt will be the fourth-line wingers and there will be an audition for the fourth-line centre job in camp. Logan Brown and Filip Chlapik could fit that need — though more seasoning in Belleville might be in store for them.

The status of Marian Gaborik was addressed, as the winger has been in limbo since suffering an injury late last season. The injury prevented him from being a buyout candidate and, according to Dorion, Gaborik is still recovering from surgery in Los Angeles.

“He still has back issues and has not been cleared medically,” Dorion said.

On the back end, the club appears poised to maybe let Thomas Chabot start the season alongside Karlsson.

Cody Ceci is locked into his usual spot of the second pairing right-shot defenceman, with Christian Wolanin and Ben Harpur battling for the job to be his partner.

The third pairing appears set with Mark Borowiecki playing the left side, with Chris Wideman on the right.

The club also announced a number of marketing initiatives, aimed at winning back fans to games at Canadian Tire Centre.

For starters, the club will announce that the price for parking in all general lots for this season will be reduced to $12. In the past, parking had become a major source of frustration with fans, as the prices in certain lots reached $30 on a nightly basis. The team was adamant that they listened to their feedback on this issue.

The Senators will also be re-opening the top portion of the 300 level of the west end of the arena — an area that was infamously covered in tarp last year.

The team is unveiling a new social area in that section, which will be geared towards standing and mingling in a fully licensed area. It is slated to be called the Coke Zone and the club is hoping to offer tickets for as little as $29 in that new area.

The Senators will also wear their red Centennial Classic jerseys for every Thursday night home game this season — that is the jersey they sported for the outdoor game against the Montreal Canadiens last season.

According to Ruszkowski, the club is working diligently on a plan for a permanent logo for the 2019-20 season — and he did not dismiss returning to the original 2-D Sens logo or moving forward with the Heritage O version.

Dorion said he’s not going to be bothered if media and fans constantly bring up the swirl of negativity that has surrounded the team for the past few months. He said that by laying out the plan in a clear and transparent fashion, he’s hoping that everyone can move forward and focus on the future.

“We can’t control the outside stuff,” said Dorion. “We’ve past the tipping point, I think. For us, this rebuild started in February.”