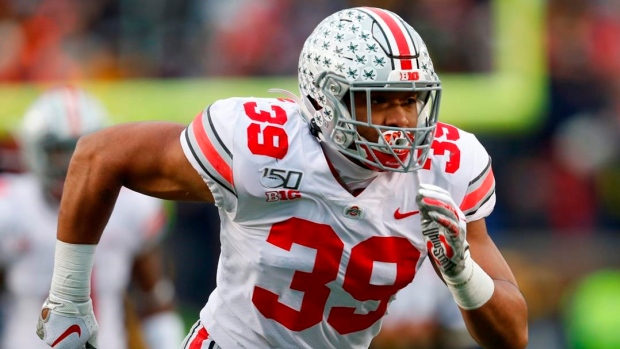 He expected the early mornings, the late nights and the wall-to-wall interview schedules. He answered endless questions and took the psychological tests. And over the past month, the former Ohio State star even mapped out a plan for what could be the most important week of his life.

Acing it could set up Harrison for a big payday on draft weekend. Struggle, and his stock could start sliding.

For Harrison and the other Senior Bowl veterans in Indianapolis this week, this is not a once-in-a-lifetime opportunity; it's an opportunity to take advantage of their previous experiences.

“The Senior Bowl is just like this: late nights and early mornings. Long days. So, it prepared me mentally and physically,“ Harrison said. “It helped a lot."

No, the two events are not exactly the same.

In Mobile, Alabama, a few dozen players practice in pads and get one-on-one instruction from NFL coaching staffs. Some might even be asked to try out at new positions.

Or as Harrison describes it — it's football and technique.

Here, more than 300 draft prospects are poked and prodded by medical staffs, run and jump in shorts, lift weights and anxiously wait to compare results. Many of the top prospects do only limited work or none at all, waiting instead for their pro days — perhaps their only chance to work out for scouts.

Players like Harrison welcome a second chance to perform on centre stage, eager to show scouts what they learned in Mobile and how they've used those lessons to develop.

“It's a tremendous opportunity when you come from a Group of Five school," Wyoming linebacker Logan Wilson said. “It helped give me a head start on it, knowing what was coming here at the combine. When you've been through it once, it makes it easier the second time."

And good results in Mobile can create more buzz around guys like Harrison or Jordan Love, the Utah State quarterback, and generate more interest when they land in Indy.

The linebackers don't work out until Saturday.

But after turning heads last month, Love delivered another impressive workout Thursday. Earlier this week, he acknowledged the challenge of transitioning from a college spread offence to a more traditional NFL offence. Just one week with the Detroit Lions coaching staff appears to have made a difference — at least with Love's improved footwork.

“The best part was just getting in that offence, and learning the NFL style," Love said. “It wasn’t the full playbook, but I was able to get a feel for it and know what I needed to work on. Getting in the huddle, calling the plays, the long verbiage. It’s definitely different than what I ran in college."

Some believe Love played his way into the first round in Mobile and potentially into the top 10 on Thursday.

The lessons don't stop on the football field, either.

While just about everyone trains to excel in the drills, even the new ones this year, others like Utah linebacker Francis Bernard used the past month to contemplate other ways to improve their stock.

“Going back and looking at how I answered some of the questions at the Senior Bowl made me think a little more about how I would answer them here," he said. “I've definitely refined those answers and some teams have noticed and asked what changed. I just explained that I'd thought about them a little more and they said I did better job here."

Certainly an extra week of football comes with risk.

South Carolina defensive tackle Javon Kinlaw shut it down in Mobile after developing tendinitis in his left knee, and Oklahoma quarterback Jalen Hurts reportedly struggled on the first day of the Senior Bowl.

But most of these guys figure more time on the football field can't hurt, and some insist it's helped them remain poised under the bright lights of the combine.

“Michael Jordan said you have to expect things of yourself before you do them," said offensive lineman Ben Bartch of St. John's (Minnesota), a Division III school. “I expected that I was going to perform well (at the Senior Bowl), whether or not other people thought I was some small-school scrub who was going to get destroyed. So I think going down there, you get that first rep out of your system and you just relax a little bit. Like, look we’re just playing football. We’re having fun. I think it was a great experience and really big for me.”