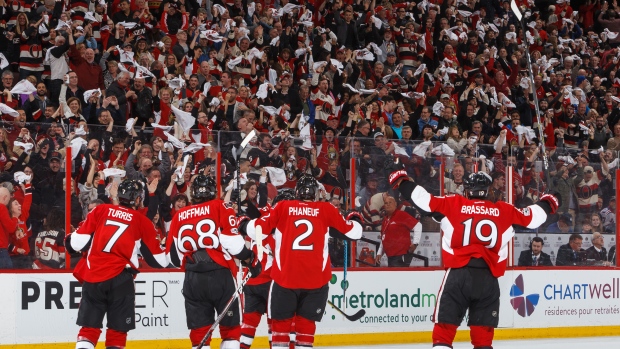 Fresh off one of the most successful seasons in franchise history, the Ottawa Senators are making a significant change to their home arena this fall.

The new look inside the Canadian Tire Centre has the top six rows in the upper bowl behind each net marked off with black draping.

“They are permanently out of the manifest,” Anselmi said. “They are the cheapest seats in the building and they were the ones that weren’t selling.”

Anselmi: Our building is too big for our market

The Senators created headlines during their run to the Eastern Conference Final in the spring when they struggled to host sellout crowds during multiple home games. The club became a punchline across the country as hockey fans couldn’t understand how a Canadian NHL team could have attendance issues deep into the Stanley Cup playoffs.

Anselmi insists the idea to reduce the seating capacity was not a direct response to the disappointing ticket sales in the playoffs. The club president pointed out the Senators had more fans attending their third-round games than the Nashville Predators – who were generating nationwide headlines in a positive way because of their boisterous home crowds. An official sellout at the Bridgestone Arena in Nashville during the playoffs last year was just over 17,300 fans. Meanwhile, in Ottawa, the Senators drew plenty of criticism after 18,111 showed up to Game 6 against the Pittsburgh Penguins – which was a few hundred shy of an official sellout.

By lowering the number of seats inside the building, the Senators are hoping to erase the perception that they don’t have enough fans in this market.

“If you’ve got less product to sell, it’s easier to sell,” Anselmi said. “If people think there is a sellout, there’s more demand. It’s all about supply and demand.”

The plan is still in place for the team to move to a downtown location at LeBreton Flats around 2021, although there are still significant hurdles to clear on that front. But one thing the club is sure about is the new arena will have a smaller seating capacity than Canadian Tire Centre – maybe in the range of 16,500 – so that it aligns better with the size of this marketplace. Reducing the number of available seats at the current arena will serve as a good test drive for the new facility.

The Senators declined to confirm their actual season ticket base for the 2017-18 season, but it’s believed the club has the smallest base of any team in Canada by a wide margin. Some estimates pegged the number at fewer than 8,000 season ticket holders last season, which meant it wasn’t uncommon for the Senators to be left with an inventory of 10,000 seats to try and sell on a per-game basis.

“When your season ticket base is so small, you’ve got so many single tickets to sell and it’s just difficult to do,” added Anselmi. “If the venue is too big for the market, then we have to make it easier for the market to fill it.”