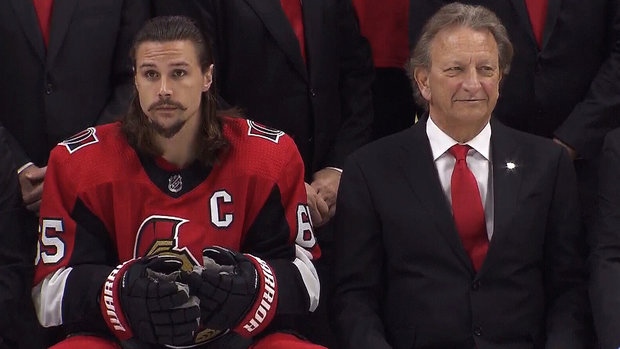 Tears welled up in Erik Karlsson’s eyes and he wondered aloud how it had all gone off the rails, how the face of the Ottawa Senators was on his way to San Jose.

“I don’t think in my wildest imagination that I would leave this place,” Karlsson told reporters. “Nobody can tell you why it happened.”

Senators general manager Pierre Dorion said the plan was put in place with owner Eugene Melnyk in a February meeting to move Karlsson, but really the germination was in what Melnyk said on Parliament Hill last December. That NHL 100 Classic weekend was supposed to be a celebration, but Melnyk’s words foreshadowed what will now be some of the darkest days in franchise history.

“You see what’s going on with player salaries and bonuses,” Melnyk said on Dec. 15, 2017. “We can’t keep spending at the top end and getting the lowest revenues. It just doesn’t work.

“I have it. But I’m not going to spend a lifetime of working hard to support a hockey team. It’s not going to happen.”

The Senators were never going to pony up to pay the two-time Norris Trophy winner his worth.

That’s how we got here, the teary goodbye at Canadian Tire Centre on the eve of training camp. The Senators shipped Karlsson to the Sharks on Thursday in exchange for Chris Tierney, Dylan DeMelo, prospects Josh Norris and Rudolfs Balcers, a conditional 2020 first-round pick and a conditional 2019 second-round pick, as well as two other conditional picks.

“They made it very clear with the direction they were going in – and I wasn’t part of that,” Karlsson said. “I wish we were standing here under different circumstances. It’s an emotional and sad day.”

Thursday marked the most significant player trade in the NHL since Jaromir Jagr was dealt by Pittsburgh in his prime in 2001. Players of Karlsson’s calibre – a four-time first team All-Star defenceman – are almost never on the move. Even on a surgically repaired foot, Karlsson drove play last season in a way that few ever have from the back end.

Karlsson, 28, is one of four active defencemen to net 70 points in a single season (he’s done it four times) – and now he will join Brent Burns as one of two on the Sharks’ blueline.

“We all know when you get to a certain point it’s best for all parties to move on,” Dorion told reporters. “Today we made the proper decision.”

Add in Olympic gold medalist Marc-Edouard Vlasic and the Sharks could lay claim to the best defence corps in the NHL now. GM Doug Wilson finally reeled in his big fish after trying to hook John Tavares and Steven Stamkos over the past two summers, among others.

Karlsson has given no guarantee that he will re-sign in San Jose, a factor that limited the Senators’ return. But Wilson is all-in for the short term, even if it’s a one-year run, though he’d clearly like to keep him.

“Yes, it’s a long-term approach and we think Erik fits for us for now and for a long time,” Wilson said.

The about-face of the Senators in one year’s time has been nothing short of incredible.

This time last year, Ottawa was set to open camp after a surprise run to the Eastern Conference Final, largely on the back of Karlsson’s sublime playoff run.

It was just 312 days ago that Dorion dealt Kyle Turris, Shane Bowers, Andrew Hammond, and first and third-round picks for Matt Duchene on Nov. 5, 2017.

Three months after Dorion felt the Senators were close enough to mortgage the future on Duchene, Dorion then said he laid the foundation for this sudden rebuild in that February meeting with Melnyk. The owner then laid the groundwork for this unpopular pending trade in an awkward video message with bystander Mark Borowiecki earlier this week.

“This is the moment to rebuild our team, shape our future with all these core pieces,” Dorion said.

One problem: the Senators may well be the first team ever to embark on an aggressive rebuild without their own first-round pick, which was conveyed to Colorado and is expected to be inside the top four.

For a generational star like Karlsson, the Senators got back a second or third liner in Tierney, a defenceman who was left unprotected in last year’s expansion draft in DeMelo, what will likely amount to low first and second-round picks, and what Dorion labelled as two “A” level prospects in Norris and Balcers.

(Ah, and there is a conditional pick for the Sens in case Karlsson is flipped to the Eastern Conference this season – since apparently the Mike Hoffman flip didn’t sit well.)

The burn is only just beginning.

That’s because the Senators have north of $20 million committed each of the next two seasons to Bobby Ryan, Craig Anderson, Zack Smith and Marian Gaborik.

Dorion wasn’t able to hold firm on shedding Ryan and the four years remaining on his contract at $7.25 million per season. Their 37-year-old goaltender Anderson has two years left and he reportedly requested a trade this summer. There is doubt as to whether Gaborik will be healthy enough to play again. Plus, the Senators are paying Dion Phaneuf until 2021 to play in Los Angeles.

To add injury to insult, an announcement is expected on Friday on the medical condition of centre Jean-Gabriel Pageau, who reportedly tore his Achilles during fitness training on Thursday and may miss the next four to six months.

Oh, and the Senators’ two building blocks – Mark Stone and Duchene – do not have contracts beyond this season. Duchene sounded last week like a player intrigued by the possibility of free agency and Dorion didn’t seem to make it Priority No. 1 on Thursday to re-sign the player he paid a king’s ransom to get last November.

“They both love it in Ottawa,” Dorion said, “and we’ll just let nature take its course in the future.”

It’s a course that has seemingly changed with the wind over the last year, sweeping out maybe the best player the franchise has ever known with it.