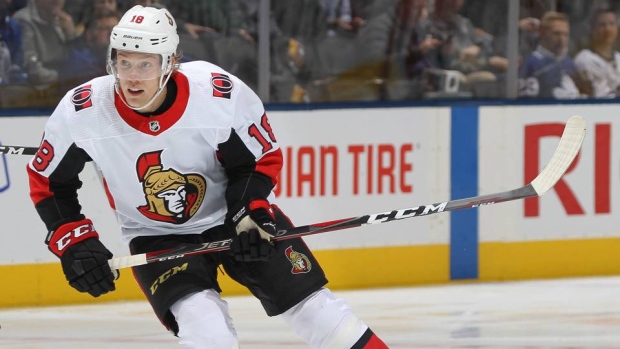 OTTAWA — The Ottawa Senators continued to sell off their team and stock up for the future on Saturday by trading left-winger Ryan Dzingel to the Columbus Blue Jackets for forward Anthony Duclair and two second-round picks.

It's the second deal in as many days between the two teams after Ottawa sent forward Matt Duchene to Columbus on Friday.

Ottawa added second-rounds picks in 2020 and 2021 to its collection for Dzingel. The Sens acquired two prospects, a first-round draft pick and a conditional first rounder for Duchene and could have up to 16 draft selections over the next three years.

"The two second-round picks add to the significant depth of quality selections we'll have available to us in the next three drafts to fuel our rebuild."

Duclair, originally selected by the New York Rangers in the third round of the 2013 draft, scored 11 goals and eight assists in 53 games this year for Columbus and now moves to his fifth NHL franchise in five seasons.

The 23-year-old from Point-Claire, Que., broke into the league with the Rangers in 2014-15 as an 18-year-old. He has registered 48 goals and 108 points in 266 career NHL games with the Rangers, Arizona Coyotes, Chicago Blackhawks and Blue Jackets.

Duclair is on a one-year deal with a $650,000 cap hit and becomes a restricted free agent in July.

"In Anthony Duclair, we've acquired a talented young winger who has a history of scoring goals in the league," said Dorion. "We plan to give him the opportunity to succeed here and expect that his speed and skill set will allow him to fit as part of our future."

Dzingel, who is in the final year of a two-year contract worth US$3.6 million and set to become an unrestricted free agent in July, has 22 goals and 22 assists in 57 games this season for the last-place Senators.

The Wheaton, Ill., native is currently one goal shy of tying his career high of 23 set last season in 79 games while his 44 points is already a career best.

Dzingel last played for the Senators on Feb. 18 against Chicago and had been held out of the lineup since with a trade expected to happen.

Ottawa also sent a 2019 seventh-round pick to the Blue Jackets in the deal.

The Blue Jackets are currently third in the tight Metropolitan Division and are making a push for the post-season.

The 26-year-old Dzingel, drafted by Ottawa in the seventh round in 2011 out of Ohio State University, was in his fourth season with the club after starting his career with their American Hockey League affiliate in 2013-14.