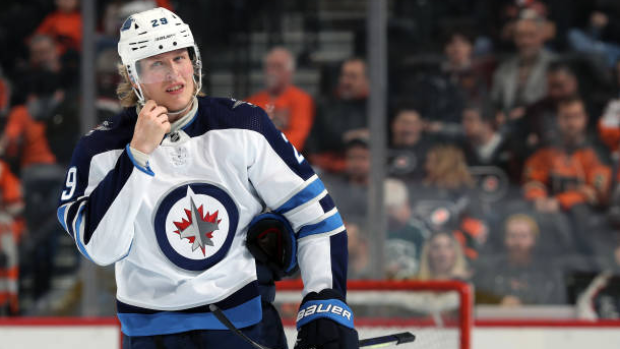 On his first day back with the Winnipeg Jets, Paul Stastny did a double take when he found out Patrik Laine was still just 22.

“My jaw kind of dropped,” Stastny said. “I’m getting old, but I thought he was 24 [or] 25 because I feel like he’s been in the league for four or five years.”

Nevermore was Laine’s veteran savvy on display than during Monday’s media availability.

After a tumultuous off-season in which his agent agreed it would be “mutually beneficial” for the Jets and Laine to part ways, Laine had an opportunity to lob a hand grenade into an already volatile training camp with Jack Roslovic since publicly requesting his own ticket out of town.

Instead, after appearing tense to start, Laine played it as cool as a mid-winter Manitoba night.

“I’m here, aren’t I?” Laine said. “That’s the only thing I’m worried about right now. I’m not in charge of what other people are saying. I’m not worried about that stuff. Right now, I’m just worried about working hard here and being the best player I can be, helping these guys be at their best.”

That Laine chose not to pour gasoline on the fire at the podium was far from a guarantee.

Remember, Laine has been one of hockey’s most brutally honest quotes since breaking into the league four and a half years ago as an 18-year-old.

Stick a microphone in front of Laine and you’re never really certain what you’re going to get.

He has been full of one-Lainers - from “I don’t care about assists” to chirping the Vancouver Canucks and their video game use to “I didn’t eat s--- food” when asked how he dropped 14 pounds one summer.

But kicking off camp on Monday, Laine vowed to not let his future in Winnipeg get in the way of the Jets’ focus on an all-Canadian North Division.

The Jets have been through worse. Roslovic and Laine would be far from the first players to ask out of Winnipeg - and the team is just one season removed from Dustin Byfuglien walking away from the game on the eve of training camp. Laine said his teammates are "well past that" where his own situation could cause angst.

“We’re not going to let that be a distraction,” Laine said. “I don’t want to be a distraction. I just want to play hard, as a team, as individuals, want to improve our game and try to play well this year.”

Laine declined to specifically address whether he wanted to be traded, or whether he endorsed agent Mike Liut’s characterization over the off-season.

“That’s not something I think about,” Laine said of a trade. “I just try to think about what’s going on today. I’m not worried about tomorrow. Right now, I’m here. I’m excited to play. I’m in good shape. I’m going to be a new player this year.”

Jets GM Kevin Cheveldayoff admitted last week that he looked at “all options” while trying to improve the team, seemingly including moving Laine, and believed he scratched that itch. A trade never materialized.

Until then, Cheveldayoff said he expects Laine to have one of the best seasons of his career - which captain Blake Wheeler said Monday will be much needed. Laine added another dimension to his game last year and still scored at a 34-goal pace over a full 82-game season.

“Does losing Patrik Laine make us a better team? Probably not,” Wheeler said. “So it’s unfortunate that things happen and maybe sometimes you’re in a small Canadian market and there’s nothing else really to talk about other than things of this nature, but Patty makes us a better team.

“We’re not alone in this and trade rumours and high-profile players, and with a flat salary cap, I think these things are just going to continue to happen. I think we’re in a better position today with Patrik Laine on our hockey team and I think we’ll just leave it at that.”

Laine is an NHL unicorn, one of the handful of authentic snipers who get the puck off in a split second with little time or space. That Paul Maurice put him with a distributor in Stastny and another pure scorer in Kyle Connor - who led the team in goals last season - is a window into how dangerous Winnipeg’s top six forward group can be in the [True] North Division.

It’s also part of what made dealing Laine so difficult for Cheveldayoff. Winnipeg needed a game-changer back in return, because it’s arguable that the Jets’ 1.0 franchise still has not recovered in Arizona from trading away the original Finnish Flash in Teemu Selanne back in 1996.

“There’s few guys in the league that are like him,” Stastny said of Laine. “He makes it look easy and people don’t realize that, the way he can handle a pass, whether it’s a hard pass or a soft pass, kind of cradle it and shoot it all in one motion.”

Laine cradled and shot both the hard and soft dishes from the media on Monday. This is a messy situation. An uncertain future remains, along with a season with immense pressure to perform, and a lingering new contract that might even make it more difficult for the Jets to deal him should he shoot the lights out again.

But that’s for another day.

“I just want to play well this year, that’s going to be the best for both parties,” Laine said. “What happens in the future, that’s not even my call. I’m here, I’m playing well, going to work hard every night, and that’s all I can do.”