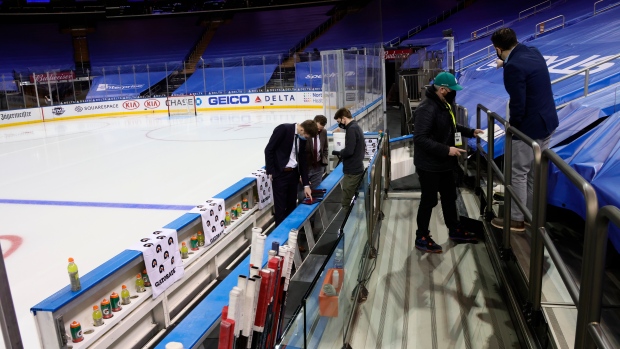 The National Hockey League announced four changes to its COVID-19 protocols on Thursday, but more may well be on the way as the league looks to flatten the curve.

Sources told TSN that the NHL and NHL Players’ Association are investigating instituting rapid testing for players and team personnel on game days. The hope is the rapid tests will help identify infected subjects who need to be isolated faster than the more accurate PCR nasal swab tests the league is currently using.

The NHL has already layered in rapid testing in critical situations over the last week to 10 days. That is expected to continue as the league works on obtaining more tests.

A total of 26 games have now been postponed this season, 17 in the month of February alone.

The Colorado Avalanche were the latest club to hit pause on their season on Thursday night. The Avs’ next four games have been postponed, at least through Feb. 11. They faced a Minnesota Wild team on Tuesday night that was notified after the game that at least five of its players tested positive from samples taken that morning.

Results from the NHL’s current PCR testing schedule take upwards of 24 hours to return; players and team personnel are typically tested each morning, so those test results may not be available until after that team practices or plays that day.

The Avalanche are the fifth team concurrently shut down, joining Buffalo, Minnesota, New Jersey and Vegas.

They are the only team to date, though, whose announcement included language that the decision to shut down was made in conjunction with a regional health authority.

"The decision was made by the league’s, the NHLPA’s and club’s medical groups in conjunction with the Colorado Department of Health, who determined that more caution was warranted while the parties are analyzing test results in the coming days," the NHL’s statement said.

Two weeks after saying it was not contemplating any protocol changes, the NHL is now considering all of its options.

"I think it’s safe to say we are looking at and rethinking everything – top to bottom," NHL deputy commissioner Bill Daly told TSN’s Pierre LeBrun on Thursday.

So far, only one player on the seven Canadian-based teams has tested positive since training camp broke.

NHL commissioner Gary Bettman pointed out in a statement on Monday that "while we have seen almost 100 players enter our COVID protocols, fewer than half have done so because of confirmed positive tests – and among that group, many have not been symptomatic."

Nonetheless, what is clear through the NHL’s changes on Thursday is that the league is concerned about player-to-player transmission among teammates in close proximity.

The league mandated the removal of glass partitions behind benches to increase air flow; it recommended that players physically distance by at least six feet between stalls in locker rooms; it is considering deployable air cleaners with HEPA filters to mitigate airborne transmission; and it asked players to limit their time spent at the rink before games.

Players around the league began to vocally push back against that last measure, to the point that the NHL and NHLPA softened the language to a mere recommendation on Thursday night.

While the NHL would prefer that players not arrive until one hour and 45 minutes before game time now, it will not bar players from entering earlier as is their routine or custom.

"This is pretty much the only place we’re allowed to come," Winnipeg Jets forward Andrew Copp told reporters Thursday. "We’re not supposed to go to each other’s houses, we’re not going to restaurants, we’re not pretty much doing anything, so the one place that we’ve made a safe space is the locker room and the rink … I don’t see what the difference between a 5:15 [p.m.] and 4:15 [p.m.] entrance [is] for guys. Really upset about it."

That possibility has raised the eyebrows of many – from league and team executives to medical experts to even regional and local health authorities who monitor and sanction the sport.

The Athletic reported this week the Buffalo Sabres were "furious" for "being forced into a dangerous situation" by hosting a New Jersey team in back-to-back games "despite the Devils showing significant signs of an outbreak."

Two New Jersey players (Mackenzie Blackwood and Travis Zajac) were in the NHL’s COVID-19 protocol before travelling to Buffalo. A third, Connor Carrick, was added on Jan. 30 after their afternoon game was completed. Then Kyle Palmieri and Sami Vatanen were added to the list on Jan. 31 after the teams split the weekend set.

The Sabres had zero players in the COVID-19 protocol before facing New Jersey.

Two days later, Buffalo’s Taylor Hall and Rasmus Ristolainen appeared on the list. Brandon Montour and Tobias Rieder followed on Wednesday. Then on Thursday, the Sabres announced Krueger tested positive, while Jake McCabe was also added to the list.

By Wednesday, the Devils had 16 players on the COVID-19 list.

A similar situation repeated itself in Denver. Five players from Minnesota were added to the COVID-19 list on Wednesday after facing Colorado on Tuesday, and the Avalanche were shut down by Thursday with the Colorado Department of Health beginning to connect those dots.

Given that anecdotal evidence, it would - at the very least - be impossible to definitively declare that players are not transmitting the virus while in close contact on the ice.

An NHL move to rapid testing may help cut down on the number of undetected positive COVID-19 participants by generating results before games are played, thus cutting down on the spread.​

According to sources, two roadblocks have stood in the way of a move to rapid tests. One is availability; rapid tests are in short supply. Secondly, the NHL and NHLPA have been concerned about the inaccuracy in rapid testing, with the number of false positives and false negatives produced. The league is believed to be seeking rapid tests from Merck, believed to be the most accurate on the market, the same brand used by the NBA - which rapid tests its players and staff up to three times per day.

The NHL's more accurate PCR tests may have worked in the controlled bubble environments in Edmonton and Toronto, but might not be as effective with 31 teams travelling to face each other.

Sources suggested the cost to switch to rapid testing may be upwards of an incremental $8 to $10 million for the remainder of this 56-game season.

Rapid testing is not a cure all, no magic wand the NHL can wave at an airborne virus. But it may reduce the likelihood of a league-wide pause to the season and help preserve the runway the NHL built into its schedule.

The NHL says it is continuing to adapt in this most unusual season, continuing to explore additional preventative measures as the number of positive tests league-wide continue to climb.

"As we continue to learn about the nature and transmission of COVID-19, we are trying to identify the relevant aspects of our game that are either unique or common among other sports and adjust our Protocols accordingly," NHL chief medical officer Dr. Willem Meeuwisse said in a statement Thursday. "We will continue to analyze all of these factors and the related medical data will continue to drive all of our decisions."