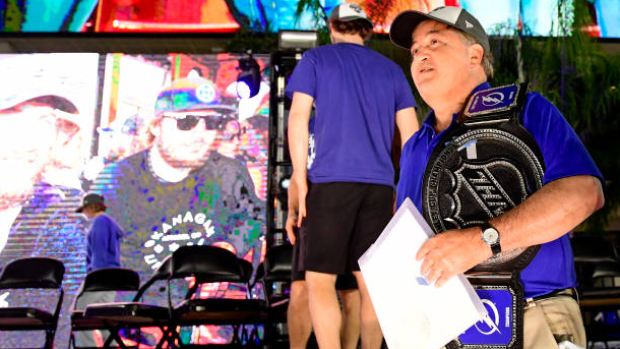 At some point during Game 6 of the Stanley Cup Final last September, once the Tampa Bay Lightning secured a two-goal edge and skated to the precipice of the franchise’s second Stanley Cup, team owner Jeff Vinik’s youngest son, Joshua, snuck onto the porch of their Florida home to arrange 100 bottles of champagne outside.

If the Viniks were going to become the first major pro sports owners to celebrate a championship virtually, they were at least going to douse each other in locker room tradition.

“We celebrated until two or three o’clock in the morning, popping bottles and singing ‘We are the Champions’,” Vinik said last week, relishing the memory. “There’s no doubt I missed being there in the arena, but I had no idea Joshua was arranging that–- it made for a very special event.”

Nearly 5,000 kilometres across the continent in Edmonton, as his team concurrently celebrated their 18-7 domination in the NHL’s bubble with bubbles, Vinik received a surprise FaceTime call from head coach Jon Cooper.

The Lightning’s raucous dressing room party screeched to a halt for a message from the boss.

“Hey guys, awesome job,” Vinik said on the impromptu call. “So many years in the making, with new guys and the guys who have been here for a while. Unbelievable effort. Dominant through the playoffs. You deserve it.”

The party resumed and continued for days, culminating in a socially distanced Stanley Cup boat parade through the bays and channels outside Amalie Arena once the team returned to Tampa.

While Vinik watching his team capture hockey’s ultimate prize from afar was an adjustment in this pandemic world, the rest of his 30 owner counterparts around the NHL are now experiencing the same strange feeling.

That’s because one of the oddities of the NHL’s COVID-19 protocols is that team owners are barred from physically spending time around their players and hockey staff this season. They are permitted to attend and watch games from a suite within arenas, but there are no locker room visits or stops at training camps or practices.

Owners and team governors are classified as “Group 3” personnel according to the NHL’s protocol, therefore “individuals who must avoid contact with Group 1 (players/coaches) and Group 2 (GMs and hockey personnel) individuals at all times.”

Even GMs and hockey operations personnel are asked to limit close contacts with Group 1 individuals to “essential interactions only.” The groups are sequestered for everyone’s health and safety, to limit contact from outside people as much as possible.

Proper perspective is key, according to Vinik.

“It’s very different not being at games, but for good reason around the league,” Vinik said. “If we call that a challenge, or hardship, that pales in comparison to what a lot of people in the world are going through right now. It is what it is. On the flip side, I’ve gotten to spend a lot of time together with my family.”

For some owners who do not often interact with their players, like Calgary’s Murray Edwards – who is known to spend a chunk of his time in London, England throughout the season – the NHL’s restrictions do not represent a big change.

But there are others who are around quite a bit.

Carolina Hurricanes owner Tom Dundon, who resides in Dallas, said the NHL’s restrictions made this season the perfect time to enact a planned cutback on his time spent in Raleigh around the team.

Dundon said Wednesday that he was flying north every 10 days or so to spend time around the Hurricanes when he first purchased the franchise in early 2018. Dundon, 49, enjoys sparking conversation and asking questions in meetings on both the hockey and business sides of the organization.

“We’re fortunate to have gotten it to a point where I have a lot of faith in Rod [Brind’Amour] and Don [Waddell], and I wasn’t going to be around as much,” Dundon said. “This [protocol] probably made that happen a little quicker. We had to change a lot of things behind the scenes, the culture and belief, or aura around this team, to get to the point where everyone expects us to be competitive and win.

“There are no changes left to make. I trust Rod implicitly. We’ve established some consistency and it’s time for them to take over now.”

Just because owners are around less doesn’t mean they won’t be watching closely. Far from it. Dundon laughed and joked that “games are the worst part” of owning a team.

“When we lose, I have a really hard time with it. I hate it,” Dundon said. “But you’ve got to hate it. It’s not like basketball, where the best team usually wins. The margin to win in this sport is so thin and that’s the hardest struggle in hockey.”

Dundon said it will “definitely be strange” not having the chance to spend time with his team and executives when they travel through Dallas in February.

“I would have liked that hour or two to learn something interesting, or hear about a resource that they might not be getting so I can fix it, or get a sense of how everything is going,” Dundon said. “But that’s life right now, it’s going to be a little different for everyone, and I feel for our players and coaches because it’s really different for them.”

Vinik, 61, said that in his 11 years owning the Lightning he had missed attending only one or two of Tampa Bay’s 86 playoff games in person before the pandemic – for a son’s graduation. In fact, Vinik said he had missed watching only two or three Lightning regular-season games live, once when he was in South America on business and couldn’t access them digitally.

Vinik said he had the option to travel to Edmonton for the final in an empty arena, but he did not have the ability to bring his family, which made the choice simple for him to stay home.

“In the 11 years I’ve owned the team, the Lightning have been a family passion of ours,” Vinik explained. “Win or lose, I wanted to share it with my family.”

He did. Now, Dundon and the rest of the NHL’s owners are hoping life can get a little closer to normal by July so they can celebrate with their team if they are fortunate enough to go deep.

“I’d imagine by then we’ll have figured something out,” Dundon said. “But we’ll see.”