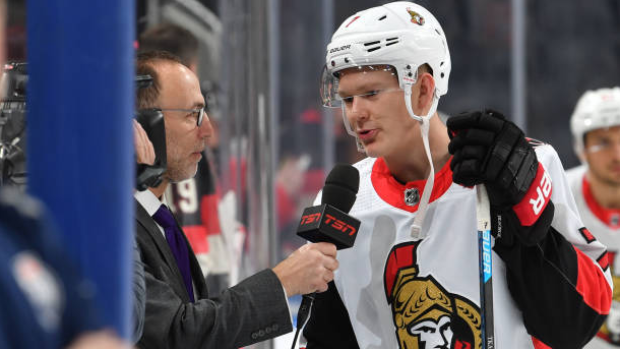 The MVP of the next NHL game might be the audio technician in the broadcast truck with his or her finger on the trigger of the bleep button.

Because if and when the NHL resumes, the telecast may not look all that different, but it will definitely sound different without fans in the arena.

“It’s going to be unavoidable,” said TSN analyst Ray Ferraro, who sees and hears a lot of the chatter from his spot between the benches on broadcasts. “I think there are going to be things that fans are going to hear that are both good and bad. You’ll notice players yell ‘reverse’ and you’ll hear and see players’ instincts jumping the play.

“But you’re also going to hear some things you don’t like. A lot of fans tell me they want more access to what's said, but it’s like Jack Nicholson on the stand in A Few Good Men when he says, ‘You want the truth? You can’t handle the truth!’ For some fans, there is going to be swearing to a point that they won’t like it.”

Ferraro said he doesn’t hear a lot of the on-ice chirping and smack talking, unless it happens right in front of him. It’s drowned out by the crowd noise, the blaring music between whistles, and the hum of the show in his headset.

But with 19,000 fans absent in an echoing arena, the ambient noise microphones ­– the ones designed to pick up the sound effects of the game, like tape-to-tape passes, shots blasting off sticks and boards, and bone-crunching hits – will pick up a lot more than usual.

“We’re going to have to keep it PG,” Flames forward Milan Lucic said Tuesday in a Zoom chat with TSN reporters. “I guess there will be a lot that’s left unsaid.”

Those microphones could also present opportunity. For one, students of the game will be fascinated by the in-game chatter, as Ferraro pointed out.

But there might be another opportunity for players to show more of their personalities, something NHL chief marketing officer Heidi Browning has been trying to encourage from players on social media since she joined the league four years ago.

Flyers forward Kevin Hayes has become one of the fan favourites in Philadelphia because of his quick wit, non-stop banter and humour on the ice that has come out when he’s been mic’d up by the team this season.

Hayes thinks fellow players would be more open to volunteering to be mic’d up during games coming out of the COVID-19 pandemic.

“I think we can be really relatable to fans. This can be a way that we can connect with fans on a personal level because most of them really don’t get to know us,” Hayes said. “You can show what kind of person you are. No one is going to believe me, but I totally forget that I’m mic’d up. What you see and hear is just how I interact with my teammates.”

For the most part, Hayes said, the on-ice trash talking is “not too, too bad.” There are certainly players whose mouth is a big part of their game. Brad Marchand was recently voted the best (and worst) trash talker in the league in the NHLPA’s annual Player Poll.

But the chirping doesn’t need to be dirty to cut deep. If it’s clean, and the microphones pick it up, it will go viral in today’s social media world.

TSN’s Gord Miller relayed a story how Ferraro used to torment one opponent during his playing days, calling him “Beetlejuice” because that player had “such a small head for being such a large man.” Players on both benches couldn’t stop laughing.

“There are funny lines here or there,” Hayes said. “It’s part of the game.”

For the player who crosses the line, there could not only be discipline from the NHL, but that player might live in infamy if the slur or swear makes it to air.

To combat that, TSN vice-president and executive producer Paul Graham said the network is in regular communication with the NHL’s broadcast group and other options are being discussed. Some focus on new technology that creates a familiar atmosphere in the building where you can still keep player announcements and music to help create the ambiance that players and viewers are familiar with. That may help drown out chirps between whistles.

Graham said if the NHL resumes, TSN and other league broadcasters and suppliers would share feeds and take every precaution to ensure the health and safety of TV production and technical staff on location.

Ferraro would likely not be stationed between the benches. Player access would be restricted and, if allowed,  interviews would be conducted on sanitized headsets. There would be different protocol in place in the broadcast truck itself to allow for distancing and to ensure the best practices of cleanliness.

“With no fans around, we could move around a couple of cameras for different angles, but we might also have to simplify our normal setup to minimize the number of personnel in the building for appropriate social distancing” Graham said. “The rink itself, with the boards and glass, naturally creates a barrier that distances the players from camera operators and technicians, unlike basketball, football and soccer, and that helps for personal safety.”

Graham predicted that the unusual nature of the season resuming might create a World Hockey Championship or March Madness-style effect with non-stop hockey.

“There is a cool factor there if they settle on four locations, this non-stop tournament with the NHL potentially playing 12 games a day, at noon, four o’clock and eight o’clock,” Graham said.

It would be a brave new world – for fans, broadcasters, and especially players.

Hayes, 27, has been in self-isolation in his Massachusetts home during the pandemic. He said the last time he played a game without fans in an arena, he was 13 or 14 years old.

“It might be tough for everyone to get pumped up at first, but these would be important games,” Hayes said. “We will adjust. There is a lot of talk; fans will realize how much we communicate on the ice. There just might be more talking on the bench now.”