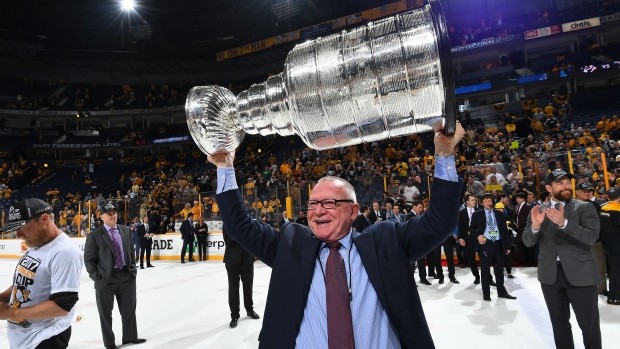 On Wednesday, one of the men responsible for hanging two Stanley Cup banners in that building left the Steel City in jaw-dropping, Elvis-like fashion.

The Penguins announced Jim Rutherford had resigned from his post as general manager, citing personal reasons. The three-time Stanley Cup champion manager, who turns 72 in three weeks, was inducted into the Hockey Hall of Fame in the builder category in 2019, thanks in no small part to the back-to-back Cups he led the Penguins to in 2016 and 2017.

The Penguins (4-1-2) are just seven games into their 56-game slate, tied for third place in the realigned East Division.

“I know it’s a little unusual to have this happen during a season, but just felt this was the right time to step away,” Rutherford said in a statement from the team.

Assistant GM Patrik Allvin (pronounced All-veen) will take over on an interim basis, the team said, with full autonomy of hockey operations. Allvin, 46, is the first Swede to sit in an NHL GM’s chair in league history. He had been at his assistant GM post only since Nov. 4, replacing Jason Karmanos, who was fired on Oct. 26.

Rutherford did not provide a specific reason for his resignation, but ruled out his health.

“No health issues, I’m probably healthier than I was 20 years ago,” Rutherford told TSN’s Pierre LeBrun.

Instead, Rutherford opted to keep his reasons for stepping down private.

“No, I’m not going to do that,” Rutherford told LeBrun when asked to elaborate on his decision. “I don’t think it serves anybody well. I’ve been treated first-class here and I really appreciate and respect what they’ve done for me. That’s the way I want to leave the Penguins.”

Morehouse said it was a “personal decision Jim made,” adding that Rutherford had “his mind made up” after sleeping on his decision overnight.

“I don’t think there’s any one thing that led to Jim resigning,” Morehouse said.

One thing Rutherford did make clear: He isn’t ready to retire just yet. This may be an abrupt end to his seven-year tenure in Pittsburgh, but it’s not necessarily the end of his career. Rutherford has this season remaining on his contract with the Penguins.

“I will just take it easy for a while until the summer time and at that point, I can decide if I want to keep working or if I want to retire,” Rutherford told LeBrun.

Morehouse said the Penguins plan to cast a wide net for Rutherford’s replacement. The jockeying for one of the NHL’s truly coveted jobs, with the chance to inherit a roster with Sidney Crosby and Evgeni Malkin, had already begun according to Morehouse. He said he received calls from interested candidates before the news was even announced.

One of the prerequisites for interested candidates, Morehouse said: a manager willing to think outside the box and be aggressive.

There is no question Rutherford was that in Pittsburgh. After a shaky end to his two-decade tenure in Carolina, Rutherford reinvented himself at the confluence of the Three Rivers.

His nickname of “Trader Jim” was well-earned. Rutherford completed a whopping 61 trades in just over six and a half years on the job. For perspective, the NHL’s longest-tenured GM, Nashville’s David Poile, has completed just 126 in 23-plus years on the job, according to CapFriendly.com.

Rutherford often had the sterling silver touch. On one of his first days on the job, he dealt James Neal to Nashville in exchange for Patric Hornqvist. He added some more speed in Carl Hagelin, changing the look of the Pens, and properly insulated his stars with Trevor Daley, Nick Bonino, Ian Cole, Ben Lovejoy, Justin Schultz and Ron Hainsey.

But perhaps what Rutherford will most be remembered for from his tenure in Pittsburgh will be his no-ego ability to flush mistakes. If Rutherford swung and whiffed, he wasn’t too proud to admit it.

Head coach Mike Johnston was jettisoned after just a season and a half, a wrong righted by the hiring of Mike Sullivan. The Penguins said hello and goodbye quickly to Christian Ehrhoff, Derick Brassard, Nick Bjugstad, Patrick Marleau and Erik Gudbranson. The Penguins missed Conor Sheary, who walked to Buffalo in free agency due to cap constraints, so Rutherford reacquired him.

His reward was the 2016 Jim Gregory General Manager of the Year Award.

“He deserves a lot of credit,” Sidney Crosby told TSN in 2016. “He’s had in mind what he wants our team to look like and how he wants us to play and showed a lot of confidence in different guys.”

Along the way, Rutherford lost lieutenants in assistant managers Bill Guerin, Tom Fitzgerald and Jason Botterill, all of whom went on to become GMs elsewhere in the NHL.

His latest protege, Allvin, will be given a long look by the Penguins. Allvin might just need to be surrounded by an experienced assistant like Les Jackson. Or perhaps Botterill, recently hired as an assistant in Seattle, will be interested in returning to the fold. Former Flyers GM Ron Hextall spent time growing up in Pittsburgh while his father, Bryan, played for the Penguins.

There is no shortage of qualified candidates (see the list below). But one thing is for certain: Whoever it is will have enormous shoes to fill. The Penguins are very much in ‘win-now’ mode after saying goodbye to Rutherford, who gave Crosby and Malkin and Co. every opportunity to do so.

“We’re going to do a careful analysis of people who are interested,” Morehouse said. “We’re looking for someone who can take this great group of players and hang another banner in the rafters.”