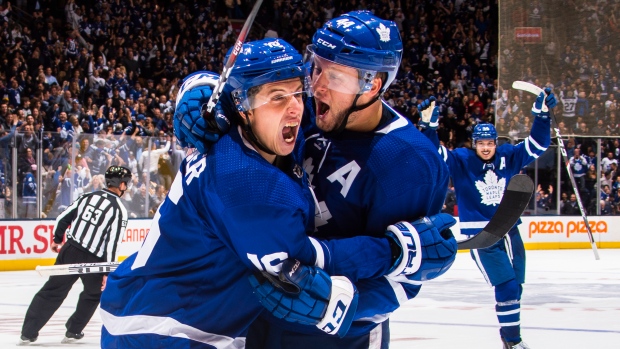 Attempting to accurately predict the North Division over the past few weeks was an exercise in mental futility.

Begin to sort through the permutations and possibilities, and it’s easy to make an argument than any one of six teams – outside of Ottawa – could fall anywhere from first to sixth in the all-Canadian club.

So, we decided to leave it to the experts.

We anonymously polled 22 people across all walks of life in the NHL – including TSN analysts, GMs, head coaches, analytics and salary cap managers, and other front office members – to see how they think it will all shake out. None of the respondents had an affiliation with a Canadian team.

There were 10 questions, but their toughest task was deciding the order of finish in the North Division.

Scoop: The ballots were as varied as you might expect. Like golf, lowest score won, with each position in the standings worth one point. Every single Canadian team received at least one vote to finish in sixth place. Five out of the seven teams received a first-place vote. In the end, the Leafs and Habs were clear cut in first and second place, but the Flames/Oilers and Canucks/Jets were closely grouped together.

2. Which Canadian team improved the most?

Scoop: GM Marc Bergevin traded for Josh Anderson and the rights to defenceman Joel Edmundson, then inked free agent Tyler Toffoli to a four-year deal, acquired a capable backup to help better split the workload with Carey Price – all while insulating his still growing group with bargain veterans Corey Perry and Michael Frolik.​

3. Which Canadian team improved the least?

Scoop: For the Canucks, this wasn’t a referendum on the additions of Nate Schmidt or Braden Holtby, but rather the losses of Jacob Markstrom, Chris Tanev, Tyler Toffoli and Josh Leivo - who all ended up on other Canadian clubs.

4. Pick one Tkachuk for the rest of their career.

Scoop: This was surprisingly lopsided for Matthew. Yes, he checks every box in today’s NHL as the heartbeat of the Flames – the five-tool hockey player – but is it possible that Brady has more offensive upside? He’s collected 15 per cent more goals than Matthew over their first two NHL seasons and did it while surrounded with a lot less help in Ottawa.

5. Which rookie will have the biggest impact this season?

Scoop: It’s been two decades since there was this much excitement about an 18-year-old rookie in Ottawa, back when Jason Spezza broke into the league. Stuetzle was recently named the best forward at the World Junior Championship while carrying an undermanned German roster.

6. Which player is under the most pressure to perform in Canada this season?

Scoop: The heat is on in for Gaudreau, who is coming off a season in which his production dropped by 35 per cent and there were cries in Calgary to blow up the Flames’ core in the off-season after a first-round loss to Dallas.

7. Which player will be the best value signing this off-season?

Scoop: Voters are banking on Kahun’s chemistry with Leon Draisaitl dating back to minor hockey in Germany, which has paid early dividends in training camp with the Oil. Perhaps another addition to the poll might have been Joe Thornton in Toronto at the league minimum $700,000 if he’s going to be productive on the Leafs’ top line.

8. Which player was the best off-season trade acquisition?

Scoop: Anderson has already opened eyes in La Belle Province for how well he moves for a big man. He’s added some much needed heft to a team that had a reputation for being muscled around.

9. Which two teams will meet in the Stanley Cup Final?

Scoop: No shortage of options here. No surprise that one of the best teams in the NHL in Colorado – which made two key additions in Brandon Saad and Devon Toews in the off-season – was picked to go head-to-head against the defending Cup champion Lightning, which brings back most of the same lineup (minus Nikita Kucherov to start the season). What a delicious matchup that would be.